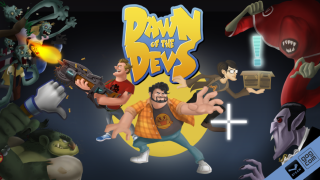 Hideo Kojima's departure from Konami was a long and dramatic affair, but it doesn't hold a candle to the situation his caricature counterpart faces in Dawn of the Devs from Underdog Studios. This game, currently seeking $65,000 on Kickstarter, has the legendary creator - or at least an alternate reality version of him - facing down hordes of monsters along with two other game developers in a battle to stop the Chief Evil Overlord (CEO) from destroying all of gaming.

Dawn of the Devs is a 2D action platformer built on parody and puns. Instead of Hideo Kojima, Tim Schafer, and Cliff Bleszinski, you're playing as Hiro Komiya, Biff Klozinski, and Tom Schiffer, respectively. And those aren't just any old enemies you're fighting; they're mindless fanboys, raging trolls, cultists who worship game review scores, and pirates. Get it? The gameplay looks relatively simple, but as a fan of bad puns and tongue-in-cheek humor, I can dig it.

At $65,000, a PC version of the game will be funded, with a scheduled release window of November 18. Console versions are tied to the $100,000 stretch goal, while three additional dev parody characters are also unlocked at higher funding tiers. Milo Deveraux (Peter Molyneux) will be added to the game at $70,000, Nick Gable (Gabe Newell) will be added at $75,000, and Shiro Miyata (Shigeru Miyamoto) will be added at $85,000.

A few gentle reminders: every Kickstarter is theoretical, nothing is promised, this is all a gamble, Santa Claus isn't real. Oops, went one matter of fact too far. Sorry!