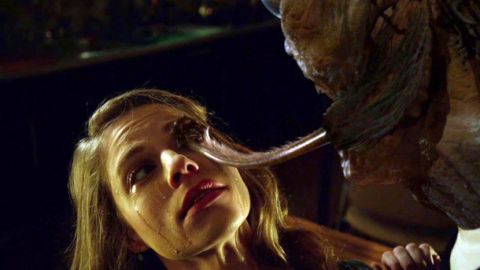 THE ONE WHERE Nick and Hank investigate a case relating to a Wesen that feeds off the tears of its victims. Meanwhile, Adalind adjusts to pregnancy in her own inimitable way, and Rosalee and Juliette team up to try and get the latter’s memory back which, let’s face it, can’t happen soon enough.

VERDICT So we’re firmly back into monster-of-the-week territory. But you know what? When the monster is as grim and twisted as this – complete with lengthy forked tongue, eye parasites and that use of the spoon (or spork for the pedantic) – it’s pretty satisfying stuff, just as long as you weren’t eating your dinner in front of the TV.

The premise is beautifully twisted. Andre steals the sight of grieving widows he picks up at bereavement support groups and literally feeds off their tears, both a great metaphor and plot device, even before Nick finds himself (for once literally) working blind.

Meanwhile, in the great paternity mystery, it now turns out Adalind's baby may not be Renard's at all, and could belong to his brother. Either way, she seems to have got herself a pretty good meal ticket with her royal heir and she knows it.

Juliette is now firmly into hallucination territory, although it's pretty hard to care, except for the great moments with her and Rosalee. Bitsie Tulloch's return has made Rosalee a vital component of Team Nick, and her insights in helping to deduce that Renard might be more than just a captain were fun to watch. In fact the whole team-building group dinner was an episode highlight, and proof there’s a room for not just both Monroe and Hank but Rosalee too in Nick’s team of sidekicks.

One quibble with the episode was the Grimm -Powers-That-Be milked every last cent’s-worth of use from the titular “Mr Sandman” track. Not since the shoe-horned-in use of the Kaiser Chief's “Ruby” in Demons has music been used to such jarring effect. A minor complaint in an otherwise solid episode, though, and one which kept the mythology and series arc ticking over while still having an above average case of the week in it; a balance G rimm doesn't always manage.

BEST BIT In a Karate Kid -style montage, a blindfolded Nick practices hitting melons batted at him by Monroe (real life Fruit Ninja anyone?) with a 100% success rate. Can we assume this is as a direct result of having his hearing heightened when Andre blinded him? This could have great ramifications moving forwards.

BEST LINES:
Monroe: “So how are we supposed to pull out one of this guy's eyes?”
Rosalee: “With a spoon.”
Monroe: “Oh. That's gotta be uncomfortable.”

• Read out other Grimm reviews