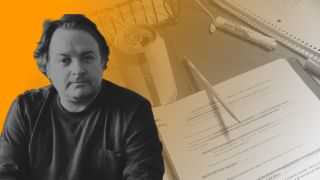 David Jaffe made his name with games like God of War, Twisted Metal and Calling All Cars, but now he's revealed he's working on a single player horror game. Don't expect to see it anytime soon though.

There are days this lack of knowing is incredibly stressful and scary. I consider myself a pro and thus I will push thru the fear and keep going.But I wanted to share: no matter your level of exp, there will be times this stage is TERRIFYING.But it's also a lot of fun!:)3/3April 28, 2019

Earlier last month he shared an image of what looked like a script, and it definitely reads like a horror game. There are references to resurrecting old gods, a witches coven, a mental hospital full of coma patients and possession.

Been staring at this all morning;in super procrastination mode.I hate it. Sometimes it just means my brain’s busy working shit out and doesn’t want to be disturbed. Other times it means I’m a lazy ass.Still hard for me to know which type of procrastination I’m dealing with:/. pic.twitter.com/fwZyWSzo8BApril 9, 2019

Jaffe is an enthusiastic tweeter and has recently shared his excitement about virtual reality and PSVR - calling Oculus Quest "sublime" and stating "PSVR still rules the roost w/the very best software around" -  but he hasn't confirmed what platform he has in mind for the new project.

The developer was the game director on the original God of War and God of War 2 (but wasn't involved in the recent reboot) and designed Twisted Metal in 1995 and the remake in 2012. Jaffe's last project was with his indie studio The Bartlet Jones Supernatural Detective Agency. 2017's PS4 exclusive Drawn to Death sadly failed to repeat the success of his earlier games, and the studio closed in February 2018.

Release Radar picks the best games, movies and shows of the next seven days every Monday at 11am GMT.