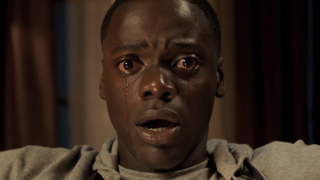 It’s heartening for any horror fan to see a movie like Get Out crush box office expectations and reach a mainstream audience it wouldn’t normally touch. It does everything a good horror movie should. It’s raw, engaging and brilliant, gruelling to watch but impossible to ignore. But it’s also much more than that.

Get Out asks questions about American society that a white guy from a village in England (see: me) isn’t qualified to address. My only point of reference is the vicious social awkwardness of the first half of the movie, which I promise is harder for a British person to watch than the most feral acts of violence. But the fact that Get Out even asks those questions is revealing. This is something that the best horror movies - specifically North American ones - have always been deceptively good at.

Many dismiss horror as all schlock, no substance, and there are endless examples to back that up. Nobody walks away from Leprechaun: Origins with a renewed sense of purpose. Sewage Baby didn’t help me discover myself. But at its best, I’d argue that American horror has often been a mirror to society, tackling issues that most blockbuster films are afraid to touch. Occasionally, such as with David Cronenberg’s movies, it’s deliberate; but it’s perhaps more interesting when it occurs organically. A story intended to shock and enthral can  reveal things about us that we were afraid to confront, precisely because horror shows us the things we’d rather ignore.

It’s probably a cliche, but George Romero’s Night of the Living Dead is a useful place to start. The 1968 zombie film sees a group of survivors forced to take refuge in a Pennsylvania farmhouse besieged by the walking dead. The presence of an African-American lead has been somewhat overstated - Sidney Poitier won an Oscar in 1964 for Lilies in the Field, and In the Heat of the Night just turned 50 - but it was nevertheless unusual, if not unheard of. What’s more interesting is how closely the bleak, brutal ending reflects the tensions of the time.

Heroic lead Ben, played by Duane Jones, survives the zombie onslaught, only to be shot dead by rifle-toting posse during the finale. It’s the sort of shock ending that leaves you stunned, but there’s a second, more meaningful element: after years of nonviolent protest, Martin Luther King Jr. was murdered on the night the movie was completed. Other films of the time tackled similar issues with more nuance and poignancy, but the tragic circumstances only make Night of the Living Dead more savage and subversive. Likewise, it’s impossible to watch the last 20 minutes of Get Out without being aware of Living Dead’s looming shadow, but it’s society itself that makes those moments unbearable. We think we know how it’s going to end, because we’ve seen it in the news. Just as Ben found death instead of salvation, what chance does Andre have when the local police find him covered in blood at the home of a murdered white family? The threat of it is chilling; what’s worse is that we’re so quick to accept it.

By contrast, blockbuster films are quite capable of tackling race in an effective way, but it’s sanitized. There are obviously outliers, such as American History X, but you’re more likely to see a ‘powerful’ three-hour period piece than a steel-tipped examination of modern, institutionalised racism. But the big difference here is perspective. You’re with Andre every moment of Get Out. You experience the threat. Blockbuster films are happy for us to condemn racism through a filter - the safe, sad eyes of Tom Hanks, for example - but rarely do we share the peril. In Get Out, there’s nowhere to hide. You’re aware of the horror, but you can’t influence it - it’s debilitatingly like the sunken place from the movie.

Horror’s perceptiveness isn’t limited to race. Tom Savini, the special effects and make up artist who worked on so many seminal horror movies of the ‘70s and ‘80s, famously learned his trade by copying the maimed bodies he saw during his time as a photographer in Vietnam. As horror became more confident in the 1970s, it became more uncompromising in its reflection of real life. The Texas Chainsaw Massacre is so horribly vivid because it’s crafted from legitimate fears: the plot was inspired by serial killer Ed Gein, and it shows in the grim hopelessness of it all. Instead of being something that happened to other people, horror was all too familiar. It’s one thing to be afraid of crab monsters from outer space; it’s quite another to be worried that your quiet neighbour could secretly be making lampshades out of human skin. Modern blockbusters are far happier to show us the darker side of society now, but at the time, it was ruthlessly progressive stuff.

This brings us back to Get Out. It’s nominally a horror film, with unsettling, almost supernatural undertones, but you’ll see more shocking violence in a Netflix-Marvel show. The true awfulness of it is conceptual. It forces viewers to face something that few of them would ever experience in real life: that a whole part of society is out to get them; that nobody cares if they go missing; that they’re truly alone. It comes to a happier conclusion than many of the movies mentioned above - thankfully, Andre isn’t truly alone - but that chilling, uncompromising central conceit proves that horror movies can still tell us something about ourselves that mainstream media never will.