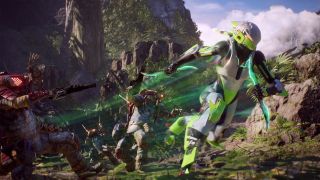 Yesterday's news that Anthem would be getting a major rework, allowing BioWare to "reinvent the core gameplay loop with clear goals, motivating challenges and progression with meaningful rewards", was hardly surprising. We've been here several times before, after all, as anyone who's played Destiny, No Man's Sky, or The Division will tell you. Even Fallout 76 is weeks away from fulfilling its own redemption story, with the upcoming Wastelanders update promising to transform the game into the fully fledged role-playing experience originally promised two years ago.

Call them what you want; comebacks, U-turns, renaissance arcs… the live-service structure has finally given video games a second chance to save themselves from disastrous launches, but are they a healthy development for an industry that already puts a premium on abusing its own trends? Is this increasingly common model a vital form of life insurance to protect failed games from total collapse, or simply a way for studios to get an unfinished product – in the eyes of many paying players, at least – out of the door, promising to make the game better once people have put down their $60 investment?

It wasn't always this way, of course. When online games failed to break into the market, the writing was on the wall. Titles like Evolve, Battleborn, and Paragon all fell short of their market expectations, and – just like that – the servers of each are now either completely closed or left floating in video game limbo, with an execution date in sight.

Pulling the plug: What’s it like to mourn a game when the servers get shut down for good

This is a fate destined exclusively for the multiplayer genre, too; while a sequel to a failed single player game might never see the light of day, its fans will at least be able to return to the original without fear of suddenly losing access to its servers. The always-online experiences that have come to define the current generation, however, are often rendered completely unplayable once its creators can no longer afford to keep the virtual lights one. As for those that do enjoy the core experience… well, they're left to grieve and pay tribute before the inevitable disconnection.

It might feel like no one was playing Paragon when Epic announced it would be shutting the MOBA down in 2018, for example, but head over to the game's Reddit page, and you'll still find vested fans posting eulogies to their long lost favourite pastime. Meanwhile, Battleborn's small but passionate userbase is organising regular sessions for matchmaking before Gearbox's hero shooter gets officially unplugged in early 2021.

For the developers, too, it can't be easy to see years of work and creative passion effectively rendered inoperable, with no one able to appreciate your craft other than by re-watching the game's original trailers online. It makes turning to a new project even harder, compounded by the pressure to restore trust amongst burned fans, who will likely approach any follow-up title with extra caution.

Don't call it a comeback

It's little wonder, then, that developers have begun to find new ways to keep their games afloat, ensuring that failure on opening weekend isn't a death sentence. While it's arguably Destiny's The Taken King expansion that popularised the trend as we now know it, it's worth reminding ourselves that it was Blizzard who first modeled the virtues of a video game comeback story with Diablo 3, followed shortly by Final Fantasy 14's own return to glory in 2013 with A Realm Reborn. While those journeys were not without challenge and a lot of hard work, both case studies proved that it was possible to come back from the brink, and that players could forgive previous mistakes.

Just look at No Man's Sky; arguably the best example of how the only way is up from the bottom of a disastrous launch. Hello Games' meditative space sim famously hit the ground stumbling in August 2016, but the studio refused to put their passion project to bed, turning away from public communication and working diligently to focus on nursing the game back to full health. Three and a half years later, and No Man's Sky is one of the most successful live-service games of its type, anchored by a vested community of spacefarers, pirates, and diplomats. Hello Games is still enriching its infinite universe with ambitious annual updates to this day, too, all free of charge and gratefully welcomed by its users.

That kind of story exemplifies the inherently additive side effects of such a comeback, but a more cynical counter argument might suggest that developers have since used Hello Games' blueprint as a way to justify far less wholesome practices. It's clear now that BioWare knew Anthem had significant problems when the game released last year, for example, and while it may not have recognised the severity of its most glaring issues before launch day, insider reports have suggested few within the studio were happy with the product that hit store shelves in 2019.

Even studio manager Casey Hudson acknowledges that Anthem's rework will allow BioWare to do "something we’d like to have done more of the first time around – giving a focused team the time to test and iterate, focusing on gameplay first." It's not a flattering admission from a studio that previously pushed back on previous reports about Anthem's troubled development, but does at least suggest BioWare is finally coming to terms with its own mistakes.

That kind of candid self-examination is a healthy process in any creative endeavour, and the live-service infrastructure has now made it possible for studios to pause, reflect, and apply the learnings of their failures to a second attempt, rather than cutting their losses and running for the hills.

Even so, the continuing popularity of crowdfunding and Early Access also demonstrate how players are more willing to invest in an idea rather than a finished product than ever before, and there's a growing danger for AAA developers and publishers to manipulate that willingness with reckless abandon.

It does set a worrying precedent as we head into the next generation; one which states that players will hand over cash on the assurance of delayed gratification. No product can be perfect at launch. Many bugs are only identified once they've manifested themselves through real-time post-launch data, for one thing.

But to ride off the windfall of a lacklustre product with the expectation for day one customers to wait for the full experience is a foundation for unhealthy relations between consumer and creator. Trust is a two way street, after all, and if studios like BioWare are asking players to trust the creative process on both sides of a game's release date, they need to be careful in pushing the limits of that trust to the point of no return.

Video games are more expensive and more difficult to make than ever before, and that isn't going to change anytime soon. The market is more competitive and crowded too, and the allowance of time for which something can be considered a success or failure is shrinking.

But games like Anthem – and the countless others that have come before it – can't afford to fail, and so developers are having to learn the art of the comeback. Whether that's a healthy trend for the industry remains to be seen, but it's something that we – as players – will need to be cognizant of as we head into the next generation of live-service gaming.