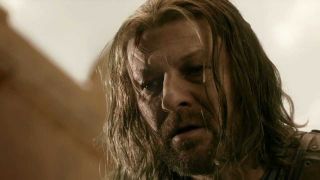 It’s one of Game of Thrones’ earliest (and best) mysteries: what does Ned Stark say when he was facing down the executioner’s blade? The show never lingered on the moment, chopping his head off as quickly as he could spit out the words, but – inevitably – fans were abuzz with theories and speculation. Thankfully, Sean Bean, the denizen of dying, has cleared everything up.

During an interview with HuffPost, Bean reveals that he was, wait for it, “just saying a prayer.” No incantations, no familial reveals, just praying. Sorry to disappoint.

“It appears that way, doesn’t it?” teases Bean, who sure sounds like he’s got a HBO hit squad scoped in on him should he reveal anymore.

The exact words he says are still under wraps – and for very good reason. Bean wasn’t too sure on the lore: “I couldn’t be too specific, because I don’t know if religion [like that] was around in those days, whatever they were. I just thought, ‘What would you do if this were really gonna happen?’ You probably would pray. You probably would murmur some words and you’d keep it quiet. You’d keep it to yourself.”

While he may (or may not) have been praying to the Lord of Light – now, wouldn’t that be a twist? – it was certainly in keeping with Ned Stark’s character. He was stoic, steadfast in his beliefs and reluctant to revel in drama, right to the very end. It was never going to be about a gigantic reveal. We’ve already had enough of them in Game of Thrones season 7 to last many a winter.

“It was an interesting thing to do for me at that point. There’s not much you can do really, you’ve got your head on a block. That’s about the only thing you can do is murmur,” Bean explains.

So, that’s that. The case closed on another Westerosi mystery. Now we just need someone to ask Gendry how he killed time rowing in that boat of his.

For another trip down memory lane, check out what reviewers thought about Game of Thrones when it first debuted. You might be quite surprised.