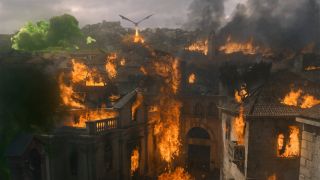 It's safe to say that Game of Thrones season 8 hasn't gone down as well as HBO might have expected. Or perhaps the angered reactions to prophesies and coffee cups is exactly what showrunners David Benioff and D.B. Weiss anticipated from the fantasy drama's final season, at least before the Game of Thrones prequel TV show airs next year.

In any case, the latest controversy comes in the form of Jaime Lannister who, spoilers for Game of Thrones so far, supposedly met his demise beneath the rubble of the Red Keep alongside his sister/lover Cersei in season 8's fifth episode, The Bells. Naturally, fans were disappointed to see Jaime exit the show right back where he started, in the arms of his sister, after his redemptive arc that had been evolving since season 1, but the latest in a long line of Game of Thrones theories suggests the infamous Kingslayer isn't dead after all.

The theory first surfaced online from a Tumblr user by the name of, uh, WeedsAreFlowersToo, who has put together a compelling list of evidence to prove that we'll be seeing Jaime Lannister return before the Game of Thrones ending yet. For one thing, none of the Thrones cast, including Cersei Lannister's Lena Headey, have posted a single tribute to Jaime's actor Nikolaj Coster-Waldau on social media, which typically occurs whenever a fellow performer leaves the show for good.

Then there's the fact that Entertainment Weekly journalist James Hibbard has been conducting exit interviews throughout the season with departing cast members whenever their associated character meets an untimely end, but when asked about the his conversation with Coster-Waldau on Twitter, the writer teased that he was "Holding that one for a bit...".

Put the pieces together, and it's looking very likely that Jaime Lannister didn't suffocate under all those bricks of the Red Keep after all, but could be returning for one last crucial episode. Could the Game of Thrones finale see the Kingslayer become a Queenslayer too? Only a few more days until we find out!

For more Game of Thrones goodness, find out how The Hound's Rory McCann celebrated CleganeBowl, or watch the video below for a recap of the latest episode.