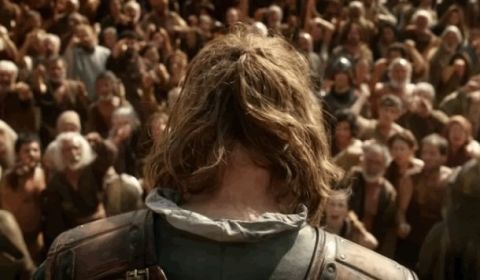 Ned heads for a fall

The One Where: Ned feels the full force of Joffrey’s idea of justice, Khal Drogo takes a tumble, and Tyrion gets his first taste of battle.

Poor old Ned Stark; shorter by a head thanks to the whims of a power-hungry boy, whether you knew what was coming or not, there’s no denying the impact of this episode. Ned’s severe new haircut in front of a baying crowd that including both of his daughters was an emotionally powerful finale, cunningly devised to satisfy the folks who have read the book, and shock the pants off those who haven’t.

And boy are we going to miss Sean Bean. He’s been the foundation on which the whole series has been built, a towering presence that has turned in outstanding performances week after week and brought genuine A-list quality to proceedings. His conversation with Varys in the opening act sent shivers down my spine, and next season is going to demand some serious casting decisions to fill the Ned-shaped hole his departure will leave.

Casually cruel beheadings aside, there was an awful lot going on elsewhere this week. After receiving a frankly pitifully small sword cut last week (a baffling decision for a series that hasn’t been shy on the blood and guts stakes), Khal Drogo has found himself bedridden and in a bad way. Dany’s authority dissolves with her husband’s health and as she employs a healer to use blood magic to save him, things begin to get nasty. There’s a real sense of danger in the Dothraki storyline, and Dany’s tale is a refreshing and intriguing contrast to everything that is going on in the Seven Kingdoms.

Yet for all this, "Baelor" felt like the first episode of Game Of Thrones that has been a little disappointing in one key respect. With both Tyrion and Robb out fighting on the front line of the war, it wouldn’t have hurt to show at least some of the action. To have Tyrion comically knocked out before his first major battle was an absolute travesty, and totally unfair to the character. Of course budget constraints mean we can’t see a huge battle involving 40,000 warriors every week, but was the only other alternative to make arguably the bravest character on the battlefield little more than comic relief? I think not. He deserves much better.

The same could also be said for Robb’s capturing of the Kingslayer. Admittedly, this scene followed what happens in the book closely, with the action taking place elsewhere and the focus staying on Catelyn, but it felt a bit strange. You never get a feel for the scale of the conflict, and it wasn’t entirely clear what had gone on in the Whispering Wood until Robb’s speech. Yes, there were some touching moments – especially Lady Stark’s emotional reaction to her son’s return – but it would have been much more satisfying to have seen Jaime Lannister taught a lesson by the Stark banner men. Here’s hoping Game Of Thrones is saving its epic battle sequences for next season, when the war really gets going.

Restoring at least some honour to his house, Ser Jorah Mormont (Iain Glenn) defends his pregnant queen with the sure hand of an experienced soldier. Yet again, Game Of Thrones proves that sword fights don’t have to be stupidly flashy to be thrilling.

Don’t I Know You?

Potter fans will have immediately felt nauseous to see none other than David Bradley (Argus Filch in the wizardly series) turning his lecherous old man settings up to 11 as relentless hound Lord Walder Frey. He even managed to make kissing Catelyn’s hand seem disgusting - imagine wiping all that old man slime away. Gross.

Ned Stark (to Varys): “You grew up with actors. You learned their craft, and you learnt it well. But I grew up with soldiers. I learned how to die a long time ago.”