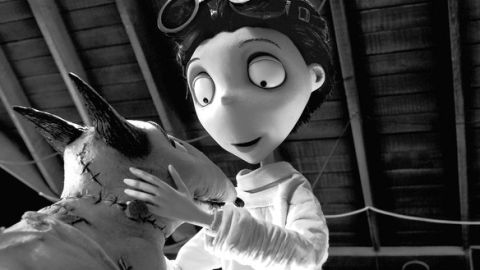 Just as scientists might be frowned on for attempting to reanimate the dead, so revisiting old haunts and highs is thought to be A Bad Idea for filmmakers.

Reversed momentum reeks of creative stagnation and soft nostalgia, the argument goes; worse still, it can expose the gap between the talent someone was and the reduced version they’ve become.

Luckily, Tim Burton must have binned that memo.

His re-imaginings of other people’s projects often disappoint; his stop-motion rethink of his own 1984 coming-of-age short is, on the other hand, a confounding delight and worthy winner of the 2012 London Film Festival’s opening slot.

Warm, witty, purely pleasurable and unusually personal for a studio film, it doesn’t just reacquaint Burton with the material, monsters and movies that made him: it reacquaints us with the Burton who seemed such a crazy-haired bag of goth-lite giggles and outsider-geek love a decade or so back.

Burton echoes his two best films early. The opening plays like Ed Wood replayed with puppets, as young filmmaker Victor (voiced by Charlie Tahan) shows his parents the amateur monster movie he’s made with the help of his dog Sparky.

Victor’s attic room could have been rented from Edward Scissorhands , the reference reverberating as we meet Victor’s suburban, hedge-trimming neighbour Mr. Burgemeister (Martin Short) and his science teacher Mr. Rzykruski (Martin Landau), whose lecture on lightning habits will have plot implications.

We’ve seen this world before, but the child’s-eye view justifies and refreshes the Burton-ian eccentricities that looked forced in Dark Shadows .

With the world still alien enough to seem skewed for kids this age, Burton makes sense of oddball character portraits like Cher-haired Elsa Van Helsing (Winona Ryder); the ‘weird girl’ (Catherine O’Hara) who peddles prophecies from looking at kitty crap; and Edgar (Atticus Shaffer), who resembles something knocked up from actor Dwight Frye and a few spare teeth in James Whale’s Frankenstein.

Lent emphasis by clear, direct black-and-white images, the bulging eyes add dashes of apposite oddness: staring at you in the unnerving manner that only kids have, their flouting of realism becomes persuasive when viewed from the right pint-sized perspective.

Equally, the 3D is properly integrated.

Burton imbues his extra dimension with resonance, whether tracing a lightning strike’s path or following the curve of Victor’s huge strike at baseball.

The latter trajectory is multi-layered, charging the 3D with the thrill of success and the comedown of consequence – inadvertently causing Sparky’s demise, Victor’s moment of glory steers the plot into the E.T .-sweet spin on Frankenstein suggested by the title.

That title tells you what’s coming next even if you haven’t seen the original short, posing predictability problems that are resolved with flair.

The extended offspring of a 30-minute film ought to flag at feature length. But Burton and scriptwriter John August conjure enough kiddy-sized horror and heart to keep Frankenweenie alive.

Burton draws his world with palpable affection, generating warmth from the characterisation of Victor’s caring, bumbling parents and embracing sentiment in a teary instance of puppy-love hewn from E.T. and fairytales.

Some lovely shadow-play involving a goldfish follows as other kids piggyback on Victor’s fledgling career as Frankenstein’s son.

There’s even a hint of canine necrophilia planted, cueing a cute reference to Bride Of Frankenstein .

The Bride nod is one of many valentines to other films pumping through Frankenweenie ’s veins, a passion for movies propelling it to a finale stuffed with Burton-ian business.

Without giving too much away, the climax plays like The Cabin In The Woods for kids, brimming with Mummy gags, Gremlins gags, mutant turtles, hairy hybrids, a rodent that gives The Amazing Spider-Man ’s mighty mouse a run for its money and more.

It’s an Easter egg parade for film-lovers, doing for classic Hollywood horror what The Artist did for silents.

Along the way, Danny Elfman’s score and a lightning-conducting bat-kite seem to drop sly nods to another of Burton’s early career peaks.

If Burton is revisiting old haunts in a bid to reignite the spark he once had, the wonder of it is that this potentially self-indulgent endeavour actually works: here, he’s marshalled the fun, feeling and film-ophilia needed to galvanize a career that – while far from dead – was starting to show a few wrinkles.

A sequel to Beetlejuice is being penned. Suddenly, raising that old ghost doesn’t seem like such a bad move after all.