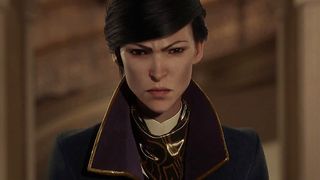 Oh sure, you might think all it takes to be a magical assassin in the world of Dishonored 2 is a blessing from The Outsider and some knives, but a new trailer shows that's only half the fun. The real challenge comes from how you combine your powers with the environment, your target's behavior, and good old-fashioned physics.

If you just want to get to the new trailer, enjoy:

For the rest of you, let's take a moment to admire why Corvo and Emily are the best there is at what they do - and what they do isn't very nice:

All together now, into the lightning fence

Why drop down and engage in a one-on-three fight when you can reverse the polarity of a lightning fence (thus harming enemies instead of you), then yank all three of your foes into it, creating a beautiful swan dive of oblivion?

Synergy is the word of the day in Dishonored 2 land. On its own, the Doppelganger ability is a useful tool for distraction. Couple it with Transposition and a deadly explosive though…

It's raining men. And death.

Stop time. Use said frozen moment to stick a mine onto an enemy's back. Send enemy flying through air toward his buddies, causing all of them to be shredded when the mine detonates. Corvo is one sadistic bastard.

You don't have to use your powers explicitly for murder and mayhem, y'know. Here, Corvo tosses an unconscious target out the window, stops time, and catches him to save him from going splat. And then he murders people. See? Totally a good guy!

I'm sure there's going to be some incredibly talented players setting up Rube Goldberg-like machinations of death even more complicated when Dishonored 2 hits shelves on November 11. But in the meantime, I'm just going to enjoy Corvo and Emily doing what they do best.