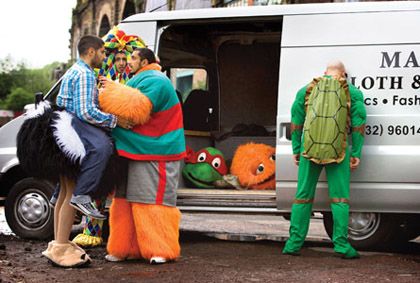 From the man who once shouted, “Christ’s fat cock!” at Sir Cliff Richard, Four Lions is predictably hilarious, satirical, dark and devilish. But it’s also a roar of humanist outrage; comic wadding packed around an acidic, acerbic centre.

With the notorious 2001 Brass Eye Special, Morris skewered the media’s habit of lazy demonisation by amplifying the absurdity (“Genetically, paedophiles have more in common with crabs…”).

Here, he plays a tweaked version of the same trick, using perceived ‘controversy’ to draw attention to his real point: the actions of suicide bombers may be monstrous, but that doesn’t make them monsters.

They’re exploited and, thankfully for comic potential, usually male and prone to in-fighting. As Morris told the Sundance crowd: “Get five average blokes to try and organise something, they’re going to fuck it up…”

And fuck it up they most royally do – once they’ve agreed on what the ‘it’ is in the first place… Omar (Riz Ahmed) wants to strike a blunt blow for global Muslims. Barry (Nigel Lindsay) plans to radicalise moderates by, er, blowing up a mosque.

Waj (Kayvan Novak) barely has the intelligence to breathe, let alone plot an atrocity. Fessal (Adeel Akhtar) is an innocent geek for whom self-evisceration is a fair admission price for getting to play with the cool kids, while Hassan (Arsher Ali) hijacks pre-posthumous video message production to develop his freestyle rap skills.

Morris steers the quintet to their fate with the deftness of a practised image manipulator. The handheld reportage style keeps the pace pumping while the screenplay is bristling with uncomfortable questions.

For some, it’ll be a stretch at feature-length, but Morris holds steady, sticking tight and sympathetic to his sad bombers until the heartbreaking end…