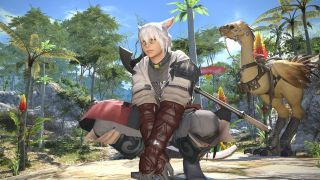 The main story of Final Fantasy 14: A Realm Reborn is pretty good as far as MMOs go, but its best moments are broken up by tedious filler. Fortunately, Square Enix says it's working on condensing the story of the base game to make it "more compact."

In a recent Q&A (translated on the Square Enix forums), game director Naoki Yoshida - aka Yoshi-P - explained that "we’re working on adjusting the A Realm Reborn main scenario to be more compact, and are aiming [to release these changes in] patch 5.3." He didn't explain how exactly the story will be condensed, but it's easy to see how it could - and, some might say, should.

Without wishing to spoil, Final Fantasy 14's base story boils down to fighting elemental Primals, collecting magic crystals, and uniting leaders. Oh, and vanquishing an evil dude in a mask. It's simple, but it works. It's got some funny lines, a few gut-punch moments, and some great boss fights. The problem is that the main scenario quests that make up the story are overflowing with boring and repetitive fetch quests, 'talk to me' quests, and kill quests for monsters you've long since out-leveled.

I've recently gotten into Final Fantasy 14 and am currently playing through the main story myself, so I speak from experience when I say it has a bad habit of slamming the brakes every time things finally get going. You spend way too much time running errands when you unlock a new town or region, and unimportant characters act as arbitrary gatekeepers to events that actually matter.

"Adventurer, there's another Primal afoot!" an NPC might say.

"Wait, could you first help this blind winemaker by killing panthers for this crazy jungle dude who will reward you with a rare breed of grapevine that he just... has?"

That is a real thing that happens, and it's not even a third of the padding attached to that particular Primal quest. The point is, A Realm Reborn could stand to be a bit more compact. Hopefully update 5.3 will bring the main quest more in line with the game's exceptional DLCs, which deliver considerably shorter and simultaneously richer stories. In any case, update 5.3 won't be out for a good long while - probably around nine months, if not closer to a year.

Why Final Fantasy 14: Shadowbringers is the online adventure that fans need.