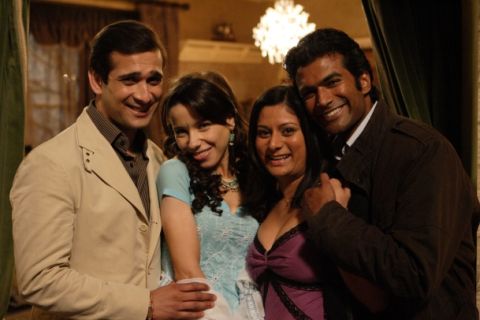 Proof that over-eating is bad for you

Sanjeev Bhaskar is being forced, at gunpoint, to eat an enormous plateful of curry. Judging by the pain on his face he’s clearly had more than enough, but his tormentor forces him to take another bite. Overwhelmed, he passes out. When he wakes up again in hospital he manages a single, blood-curdling scream... before his guts explode, Alien -style, coating the doctors, walls and ceiling in half-digested, disgusting curry. He’s just the latest victim of a food-obsessed serial killer stalking Southall’s Indian community....

Director Gurinder Chadha – as evidenced in the behind-the-scenes clips which run over the end credits – is a woman who loves a good laugh, and the Bend It Like Beckham helmer has gone all-out slapstick here. Ostensibly the tale of an Indian mother, Mrs Sethi (Shabana Azmi), who goes to desperate lengths to protect her daughter Roopi as she searches for a husband, the movie takes a left-turn into supernatural territory early on. Mrs Sethi’s the killer, you see, offing anyone who criticises her “fat” and “ugly” offspring (spare a thought for poor actress Goldy Notay, who isn’t actually fat or ugly at all). When the ghosts of her victims return to torment the overly-maternal murderer, things look bad – but before you can say “What’s he doing in Southall?” Heroes’ spectacularly pretty Sendhil Ramamurthy turns up to woo young Roopi. Could it be love? Or is he just trying to unmask the murderer?

The film is stuffed to the rafters with good-natured, gory slapstick, homages to other films (there’s a superb Carrie send-up) and stirling turns from Mark Addy as a hard-boiled copper and Zoe Wanamaker as a daffy neighbour. It’s amusing, messy fun; colourful and stuffed with cultural in-jokes... but, deliberate homages aside, there’s very little here we haven’t seen before. The novelty of a supernatural romance being set in Southall helps a lot, as does Azmi’s nuanced and genuine performance, but there are few surprises.

Still, while It’s A Wonderful Afterlife isn’t exactly wonderful itself, it’s still a warm, happy movie with a kind heart underneath all the death and gore. Although it might put you off eating curries for a while... Jayne Nelson