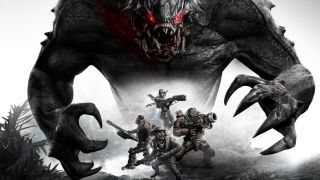 Back in July, Evolve developer Turtle Rock announced that the game would be going free-to-play, first on PC, followed by PS4 and Xbox One. That was the plan, but Evolve won't be going free-to-play on console after all. Not only that, but the developer has moved on from the game, and no more new content is planned, regardless of platform.

"Seems like the greater things you aspire to, the more time it takes. We had huge aspirations for Evolve, and while we got to spend five and a half awesome years on planet Shear with a ragtag group of Planet Tamers and fearsome Monsters, it still doesn’t feel like enough - we were hungry for more but unfortunately today is the last day that Turtle Rock Studios can work on Evolve," reads a post on the developer's website. "There’s a lot that we really wish we could have done, especially taking Stage 2 to consoles, but it looks like that’s just not meant to be."

Publisher 2K will be taking over, and will keep the servers running for the time being. Its messaging is a bit more optimistic than Turtle Rock's, stating on its blog that it would "evaluate the possibility of bringing the Stage 2 experience to consoles in the future," but would focus on maintaining its PC audience for now.

In other words, the game's not dead, but its future doesn't look too bright. And those who were waiting to give the free-to-play version a shot on console, you have my condolences.