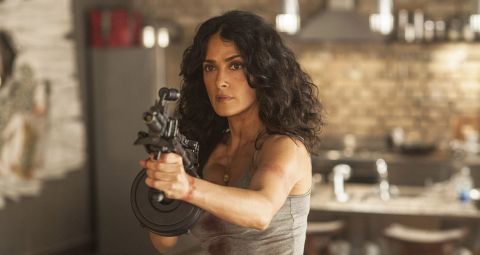 A facepalm of a film that places no value on life or limb yet still expects the audience to, this sub-par shoot-’em-up plays out like Four Rooms’ fifth part.

We’ve seen ‘one-room’ sci-fi (Cube), horror (Maléfique) and thrillers (Buried) before, so why not an action movie? Cheap to make, easy to follow and claustrophobic to watch; what could possibly go wrong? Everly.

Despite its game leading lady, intriguing director (Joe Lynch directed Wrong Turn 2, arguably an improvement on the original) and exciting premise, even star Salma Hayek seems keen to forget it, telling the press “It’s not what I thought it would be. I want it to go away...”

We begin in the bathroom of the eponymous Mexican prostitute who we meet, bloodied and naked, retrieving a hidden gun from the cistern while Japanese gangsters threaten to break down the door. She pulls on a tiny nightdress, looks at a photo of her estranged daughter that she keeps in a locket, then opens fire on the men laying siege to her apartment.

It’s a promising start but, as the violence escalates from bullets to bazookas, and wave upon wave of extraordinarily inefficient assassins, police officers and torturers keep Everly from making a break, the film quickly becomes a repetitive mess of squibs, stupidity and misogyny.

The secondary performances are terrible and even Hayek comes across a little soap-opera thanks to breathlessly poor dialogue such as “You are nothing! You don’t exist! This is a nightmare!” Though the splatter SFX are excellent, there’s a streak of sexual sadism that curdles whatever escapist entertainment might have been had.

Depressing jokes about dead whores abound and it is heavily implied that Everly has just been gang-raped – not that this stops the film from sexualising her. To pull off such tonal lurches you’d need to be Quentin Tarantino or Robert Rodriguez. Too stupid to be funny and too nasty to be fun, Everly manages to be all over the place, even if it never actually leaves its single locale.

A facepalm of a film that places no value on life or limb yet still expects the audience to, this sub-par shoot-’em-up plays out like Four Rooms’ fifth part.