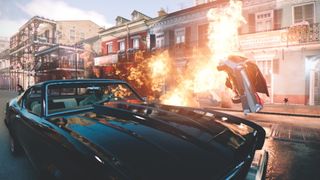 The light is failing, the rain is pouring, and I’m bouncing over the dirt tracks that masquerade as roads in the Bayou at pace. If contending with the loose handling of the rust bucket I’m driving wasn’t enough, snaking over the rivers that cut New Bordeaux’s rump up like a patchwork quilt means getting anywhere in this town takes an age.

The goal, however, is too tempting for me to resist. I’m heading out to complete one of Mafia 3’s many side-missions – a simple but lucrative job that involves taking out a band of racist ‘yocals’ before stealing their truck and dropping it off downtown in one piece. Of course, in the back of my mind sits the fear that things won’t go to plan. Not because I’ll die in the crossfire, but rather because I doubt said band of brutes will be there in the first place.

This is one of Mafia 3‘s notorious and recurring bugs: missions that are marked on the map repeatedly turn out not to be active. Even more frustratingly, that’s something you only discover once you’ve driven all the way out there. Having lived within New Bordeaux for the best part of six months, I can attest such inconveniences are anything but a rare occurrence. It is in fact part and parcel of life in Hangar 13‘s beautiful, but ultimately botched metropolis, and just one of a never-ending list of bugs and glitches that have become Mafia 3’s signature since it launched.

And yet, here I am, still living out my life as Lincoln Clay. In part, that’s because the game retains its undeniable promise. At release, Mafia 3 was reviewed as the very definition of an average game. Its missions quickly become repetitive and the world they inhabit – though superficially full of life – is largely barren in practice. Even the aforementioned side-missions are essentially a rehash of tasks from the main game: sneak into a base and kill a lot of people en route to a designated target. It soon becomes dull, and a little tiresome.

Intermingled with all of this, however, is a hell of a story. Without slipping into spoiler central, Lincoln Clay’s fight for New Bordeaux is littered with tales of racial discrimination that perfectly mirror 1960s America. Indeed, make it through all the game’s bugs and you’ll find Clay’s life touches on some of the biggest historical events of the last century. Mafia 3 truly has something to say, and that’s a trait few of its recent AAA peers share. Shame then that it plays like bobbins.

Within my first hour, I’d managed to throw an adversary into a wall – quite literally into it. His limbs and torso twitched around as they became consumed by bricks and mortar. Little did I know that was just the start. A few days later, a mission where the sole objective was to sneak into a base and destroy a car was spectacularly brought to a premature end when the game itself decided to randomly spawn another car directly within it. Both vehicles exploded without any input from me whatsoever. Mission accomplished, I guess.

Gaffes like this happen so regularly that searching for Mafia 3 bugs on YouTube – of which there seem to be hundreds – is not necessary. You can pretty much guarantee every 20 minutes or so something out of the ordinary will happen. Furniture will dart across the room of its own accord, dead bodies will twist and flap around as if possessed, major characters will appear on screen twice, cars will drive off into the sky, and...the list goes on.

Pack all these together into one play session, and you’ve pretty much got Christmas. So entertaining, so hilarious are some of the results that I’ve been petrified Hanger 13 will push out a patch that clears the decks. But thankfully that’s yet to occur. All the mania remains intact, enabling me to go on sampling this playground of imperfections without interruption. Broken as Mafia 3 may be, it seems it’s incredibly hard to say goodbye to a world where absolutely anything can happen at any moment.