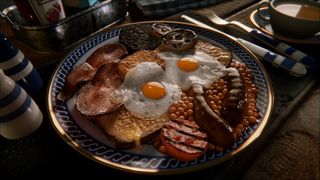 The latest creation out of Dreams Early Access is an uber-realistic model of the archetypal full English breakfast, expertly cooked - er, created - by a team of talented Dreams creators.

I have now published my "Full Beech Breakfast" in #MadeInDreams for all to have a closer look at! :)https://t.co/ruf1FQiKb0 pic.twitter.com/pJyxGHaej0January 2, 2020

When images of the culinary masterwork cropped up on Twitter, my first thought was, what's so special about a plate of sausage, eggs, and beans? It seemed an aesthetically-pleasing breakfast, to be sure, but nothing out of the ordinary (surely not to my GamesRadar+ family in the UK). Then, I read the caption and realized I was looking at a stunningly-realistic creation by a Dreams Early Access player.

From the delicate air bubbles and specks of pepper in the sunny-side-up eggs to the blackened side of ham and saucy beans, 'Full English breakfast' by John Beech is as mouth-watering as it is fascinating to behold. Beech says the breakfast was made in collaboration with Snaggs, Lucid Stew, and DirtyHarolds.

For the uninitiated, Dreams is a game in Early Access being developed by Media Molecule, who you might remember from Little Big Planet. As of now, it's a PS4 exclusive, but we learned late last year that the studio has early plans to publish Dreams creations on other platforms, possibly including PC and Mac. That means the game will likely remain a PlayStation exclusive, but the goal is to let creators publish, and monetize, their creations on other platforms.

A new decade means plenty of exciting new games, and here are the best upcoming games of 2020 and beyond.