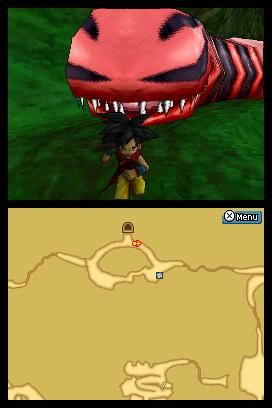 If there was ever a monster outside of Pikachu that you just wanted to take home as your new pet, it'd be Dragon Quest’s lovable slime. How could you ever want to hurt that precious smiley face on that little blue drip? And while Dragon Quest Monsters: Joker 2 will break your heart because you’ll have to do just that, you’ll also recruit these monsters in your attempt to the become a Pokémon Mas... uh, Monster Scout. During our time with Joker 2, some aspects separated the game from Pokémon, but we also found plenty that mimicked Game Freak’s baby. In the end, what you have in Joker 2 is the “gotta catch 'em all” addiction amidst the classic Dragon Quest world... but it doesn’t quite hold the same lure as the game it apes. As generic as Joker 2 can be, the game still does enough right to make it fun.

The story is so shopworn it's hard to take seriously. You play a poor lad who just can't afford the travel fees to compete in the monster scout tournament. Naturally, you stow away on an airship like any sane person would do. You're of course found and forced to perform manual labor to pay your way. When the airship crashes, it’s up to you to search for missing ship members, battle monsters, and discover locked away secrets of your new locale. Forget that tournament, this is the stuff that legen-wait for it-dary scouters are made of. You'll encounter some cliché characters, stilted dialogue, and plenty of bad jokes. It's a little disappointing, but the Dragon Quest series has never had groundbreaking narratives... the focus was always the world and exploration.

The bulk of gameplay consists of recruiting a team of monsters while navigating labyrinths and other destinations on the island. The structure is repetitive and humdrum, because while the locations are varied enough, the setup hardly changes - go to a new location, find a missing ship member, help them out with a task, battle an enormous monster, rinse and repeat. Recruiting monsters is more random: each party member will strike a monster and the end percentage determines if they’ll join. It can be frustrating sometimes, as probability doesn’t always work in your favor. Still, it’s always nice when a monster with a low percentage joins the team. The good news is you’ll never be at a loss finding a monster since there are over 300 available. It’s addicting, but maybe that has something to do with just how cute these monsters are.

This wouldn’t be Dragon Quest without grinding, and this is where the game loses a lot of casual appeal. Leveling up is essential because of customizable skills, but experience points don’t come quickly enough. Boss battles award a wealth of experience, but only account for a fraction of experience gained. Grinding becomes as necessary as it is in a Korean MMO. Dragon Quest fans already have a high tolerance to the grind, but for everyone else, at least the battles play out quickly, as you can set up tactics for your monsters and battles continue apace. The system isn’t flawless: if you’re not manually giving orders the AI will choose seemingly random targets, leaving them vulnerable to more damage.

Where Joker 2 separates itself from Pokémon is in its monster fusion. The concept is simple: fuse two monsters together, one with a positive charge, the other a negative. Then select three skills to pass on to the new monster. In love with a particular skill or need that slime to absolutely, positively have Zap? You’re in luck. The fusion is fun to experiment with, but the problem is that the game places such emphasis on it for success. This also starts the forced grinding: you can’t fuse until a monster reaches level ten, and after fusion the leveling begins again. There’s no time to form attachment with your monster; Joker 2 wants you to take your little babies and toss them aside to fuse a brand new monster. A tear may have been shed when we were forced to abandon our very first slime...

Joker 2 for tries to make the whole journey more enjoyable with little changes - monster arenas, battle-changing weather effects, and fast-travel abilities. Having more than one area in some of the dungeons to fast travel to would have helped: many are lengthy, and the game forces you to go back to your ship often to buy new weapons and fuse new monsters. The biggest issue was going back to dungeons and not remembering where we left off, which was especially frustrating due to their complexity. Joker 2 also features much in the way of online and local wireless options - like battling and trading with those both far and near. It’s a nice touch, but it will likely only be used by the hardcore players.

One issue that should have been fixed by now is the camera. It can be difficult to see where you need to be going next, such as climbing vines down to a lower level. Even with manual adjustment it’s impossible to see the exact spot you need to hit. The minimap does help combat some of the camera issues, but that shouldn’t be the solution to navigation. If the game had a better UI or crisper models, this would be easier, but the grainy graphics don’t give the game’s systems or Toriyama’s art justice.

Dragon Quest Monsters: Joker 2 is sure to be a thrill for the most dedicated Dragon Quest fans - doubly so if they’re Pokeaddicts. Still, the game is far from perfect and unless you’re one or both of the above, it probably won’t be the game you’ll talk about the most this year. Joker 2 is one of those games that’s fun in short bursts, but isn’t all that memorable. It does borrow some of the great parts of Pokémon while carving out its own identity in the rich Dragon Quest world. But of all the things it had to borrow from Dragon Quest, why, why did it have to be the endless grind?