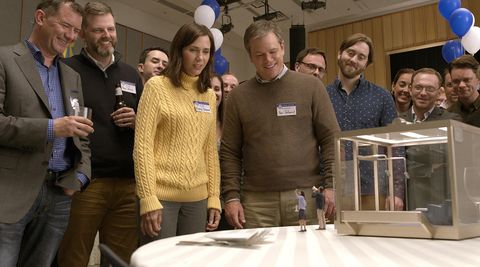 No small achievement. Alexander Payne re-confirms his position as one of US cinema’s premier filmmakers.

Election, About Schmidt, Sideways, Nebraska – you might say that the films of Alexander Payne contain microscopic studies of masculinity, featuring men who try to find their own small place in the world… but not too small; it’s their very feeling of insignificance that forms a large part of the problem.

In Downsizing, Payne and his regular co-writer Jim Taylor take the theme as far as it will go, offering a dark, sand-dry sci-fi satire that envisions a near-future in which citizens can opt to undergo the irreversible procedure of ‘cellular miniaturisation’.

Why choose to be shrunk down to six inches and lifted off the operating table on a spatula, you might ask. Well, Payne and Taylor have some pretty persuasive answers – it’s great for the environment and, in specially built toy towns such as Leisure Land Estates, your meagre savings stretch to a lifetime of luxury. And so it is that struggling occupational therapist Paul Safranek (Matt Damon) and his wife Audrey (Kristen Wiig) elect to downsize and upgrade to a gigantic doll’s house.

The reality, naturally, is altogether different to the pocket-sized American Dream they were sold, with this Disneyfied Lilliput turning out to be little more than a microcosm of the world at large, with all of its burdens and ugliness. Having a noisy playboy neighbour (a grandstanding Christoph Waltz) is just the start.

Paul’s complacent eyes are soon opened to the troubles of cleaner Ngoc Lan Tran (Inherent Vice’s Hong Chau), a Vietnamese dissident who lost a leg while being smuggled into the United States in a cardboard box, and is now living not in a world of A3 tennis courts, shoebox-sized swimming pools and white toothpick fences, but an itsy-bitsy slum.

By peeling back the layers to introduce pain and vulnerability to her ‘comically’ no-nonsense demeanour, Chau turns what at first appears to be a borderline racist caricature into the highlight of the film.

In fact, much like its heroes, Downsizing morphs as it goes on. Just when you have it pegged as a high-concept black comedy comprising meticulous compositions and tart one-liners – as controlled as the cine-worlds of the Coens or Wes Anderson – it loosens up and hits the road (to Norway, no less), allowing life, with all its ragged spontaneity, to flow into the frame.

Some will undoubtedly see the shift as a loss of focus. But in letting Downsizing expand, Payne makes room for the bigger questions (including the threat of human extinction) to be satisfyingly explored beyond a few sharp jibes, and for his often misanthropic humour to give way to humanism.

In other words, when it comes to heart and conscience, Downsizing goes pleasingly big.

Downsizing review: "Alexander Payne re-confirms his position as one of US cinema's premier filmmakers"

No small achievement. Alexander Payne re-confirms his position as one of US cinema’s premier filmmakers.