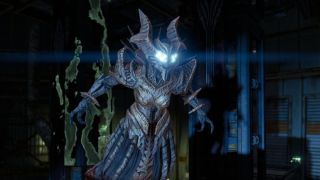 The world of Destiny: Rise of Iron got a little less cheesy today. Bungie released a hotfix for the game that finally removed the trick to quickly farm Omnigul for sweet, light-boosting loot, among other changes.

In the Will of Crota Strike, Omnigul briefly fights players before teleporting away to the final battle area. If you managed to kill her before she retreats, she would drop her boss loot, your party could die and respawn, and then you could kill her again indefinitely. At the 320 Light level strike she'd drop blue gear up to level 365, which is a great starting point for the new Wrath of the Machine Raid. After the hotfix, she'll drop rewards only once per Strike; The Giving Wizard is no more.

But it's not all bad news. The hotfix tweaked Quarantine Patrol Missions so that they'll always drop an Archon's Forge Offering once you kill the Splicer Priest in the second phase, and the Archon's Forge arena has a higher chance to drop offerings as well. Check Bungie's official site for the full patch notes.