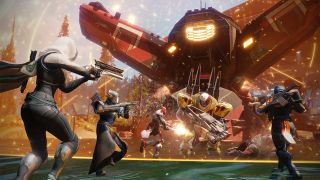 The sherpas were a staple of the original Destiny experience; a system of charity, primarily facilitated online through Reddit and other platforms, whereby high level guardians looking for something to do would help less experienced players get through various Strikes, Nightfalls, Raids, and more.

Friendships were formed, wisdom was shared, and much loot was obtained but, with Destiny 2, the sherpa community was uprooted and rebooted, and all those pro guardians suddenly found themselves back at the bottom alongside everybody else. Now that Destiny 2 has been out for a few weeks, and players have had time to readjust, I talked to a couple of veteran Destiny sherpas about how the experience has been so far in Bungie's sequel.

The most significant change for sherpas in Destiny 2 has undoubtedly been the introduction of Guided Games. Previously, with the first game, those who were either seeking or offering assistance online were doing so because Destiny had no system in place for strangers to play together in its end-game content. In fact, you could argue that the whole sherpa community was founded specifically out of a demand for something like Guided Games. Now that Bungie's own solution exists, are Destiny’s original sherpas satisfied with the results, or do they feel as though they’ve lost a little bit of their purpose?

On the contrary, sherpas like noob35746 (don’t be fooled by the Reddit username, he’s a Destiny veteran already enjoying the nuances of endgame in Destiny 2) thinks Guided Games barely holds a candle to the value of the sherpa system, and offers up his explanation as to why.

“Guided Games doesn't really function as an effective ’looking for group’ mechanic, nor does it work well for good Sherpa runs.” he explains. “It doesn't allow you to pre-plan runs or even ensure that people have budgeted the time for a Raid, plus if the group disbands you don't really have any options. The wait times are horrendous for sherpas in Guided Games, and you’re rolling the dice on who you end up with.”

As someone who has frequently attempted to seek out fireteams via Guided Games, I too can attest to the fact that the system in its current form has problems. Wait times in the queue are far from ideal, and the absence of checkpointing makes it an awful entry point for the Leviathan raid, which can take several hours to complete and is typically done so over a series of multiple days.

The other advantage for sherpas offering help online, as opposed to finding potential apprentices through Guided Games, is that it gives them more choice and flexibility over the constitution of their fireteam. This is why mentors like Soggy_Diaper still prefer to organize a sherpa-led raid outside of the Guided Games platform.

“When I run the raid I like to bring only 1 or 2 people who have not completed it or still struggle, since putting them in my team of 4 it makes it easier to guide them,” he says, explaining that: “with the new Raid mechanics of Leviathan, I find it gets too hectic with three or more inexperienced players who don't fully understand encounters.”

Noob35746 and Soggy_Diaper’s comments are indicative of Guided Games’ growing pains, but not every Sherpa shares their viewpoint on the new feature. Jmitch219916 argues that Bungie has made Destiny 2 a far smoother experience for new players compared to its predecessor, “way better at helping inexperienced guardians complete Raids, [with] Guided Games the best it can be for the time being.”

The end of an era?

This is good news for players with less time on their hands, who can still enjoy as much of Destiny 2 as possible without the need for unreasonable investments in time and energy. But what about the experience for the sherpas themselves: those who are used to dedicating a lot of their personal time and energy to Bungie’s shared world shooter? Guardians like TheObsessedGamer, for instance, would go so far as to say that the game has become too easy, especially after getting used to the end-game flow of the original Destiny.

“I’ve played a lot [of Destiny 2], but I’m already done with it just a few weeks after launch”, he tells me. “I was grinding hard still on Destiny 1 for items, but in Destiny 2 the level system feels like a ladder more than ever. I wanted way more items, guns, and gear to hunt for, and with more ways to hunt them.”

Squirrt is another estranged Destiny 2 player who doesn’t see himself returning to the game anytime soon, despite the fact that he played the original game right up till the Rise of Iron expansion from last year. “Now that there’s no real grind, I don’t see the point of helping others progressing. And without PvE leaderboards, there’s nothing to even distinguish if you’re an elite player: for better or worse, any sense of elitism is gone from the game.”

The “grind” that Squirrt refers to is something that every vanilla Destiny player will be familiar with, and the imbalance between effort and reward was generally considered to be one the the first game’s biggest problems. But, at the same time, making it through Destiny’s grind was almost a rite of passage for the “elite” players that Squirrt is talking about; an endurance test which allowed Destiny’s sherpas to gain the knowledge and reputation they needed to distinguish themselves from those they took under their wing.

With Destiny 2’s milestones feature and its expanded breadth of content, all guardians are now free to play as they choose, safe in the knowledge that any of their preferred activities will still reward them with a healthy amount of loot, experience and reputation.

Outside of Guided Games, sherpas like Army61040 express to me their grievances with Destiny 2's clan system, particularly its arbitrary cap on 100 players per clan, which hampers the ability of a sherpa to do their job.

"How can a clan of sherpa's grow and accept new members when they only have 100 slots?", asks Army61040. "Our clan has found a way around this, but that is because we refuse to turn anyone down and set our rules to invite only. This is what a Sherpa does. They don't care how difficult it is, they always find a way to make sure their team and members are taken care of and that nobody is denied help."

Bungie itself has explained that this limitation is to foster a sense of intimacy and familiarity within each clan, so that players can more easily get to know each other. Still, compared to other games with Guilds and Clans that can run up to the thousands in player numbers, this restriction is perceived as a problem for sherpas who are specifically seeking out anyone, friend or stranger, to whom they can offer their services.

“Destiny 2 serves the kind of players who have two hours a week to hop on play to the game and be done,” says Squirrt. He makes the remark as if it were a criticism, and maybe for a retired sherpa like himself, it is. But Bungie’s decision to democratize Destiny 2 has ultimately been for the betterment of the game overall, boosting the appeal of long-term commitment to a wider franchise of players, even if that bittersweet bite of the first game’s grind cycle has been dulled in the process.

Even with all these changes, though, willing sherpas are not going to be out of a job in Destiny 2 anytime soon. While Guided Games has been, at least in theory, celebrated as a step in the right direction for improving the quality of life of the Destiny experience, its technical shortcomings and haphazard implementation has allowed the sherpa community to pick right back up from where it falls short. It seems as though the honorable work of the sherpa is never quite done.