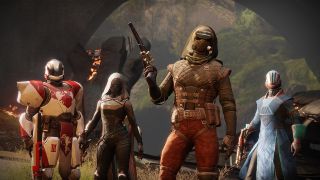 The Destiny 2 Crucible has evolved dramatically since the game's launch. It started as a 4v4 mode with a double-primary weapon system, but it's largely returned to the 6v6, special weapon and ability spam glory of the original game. Guardians die faster, objectives are more complex, and playlists are more varied than ever. The Crucible is fun to get into but it has a steep learning curve, so we've put together over a dozen fundamental tips that will help you make sense of Destiny 2's PvP.

Read on, ready up, and prepare to rack up some kill sprees. Whether you're a casual player or an aspiring Freelance Competitive champ, there will be something here to help you up your game, from tips on which gear to use, to higher-level team tactics. But let's start with the most obvious thing.

Clash - A traditional team deathmatch. Work with your team to kill the opposing team more times than they kill you, until you hit the time limit or the score cap.

Control – Capture and hold up to three control points in order to increase your team’s score and multiply the points you score for kills.

Countdown – An asymmetric attack/defend mode, where on alternate rounds one team must plant a bomb at a designated point and defend it until detonation in order to score, while the other team fights to defuse it.

Survival – A tighter, more strategic, higher-risk variant on a team deathmatch, where each side of four has a limited stash of eight lives to cover the entire team. When all lives are used up, the round is lost. The match is played out over the best of five rounds.

Fight as a unit, but know when to split up

Close-knit team play is the key to Destiny 2's Crucible. If you don't stick together, you're dead. Responsible, team-minded play will always win. Concentrated fire and smart, co-operative movement are key to victory. If you ever find yourself separated from your team, stop what you're doing and regroup, otherwise you'll likely be overwhelmed by the enemy team.

But at the same time, you need to be careful. While you need to move as one unit, you don't want to physically be one unit. Bunch up too tight, and you're asking for a full team-wipe by way of a rocket or super. Warlocks go hunting for bunched up squads and eat them for dinner. You'll also want to be able to break apart slightly to flank opponents. And expanding on that point, you should always...

Concentrate fire, but know how to split your firing angles

Rushing down opposing players with a concentrated salvo of multi-Guardian fire is something that you should absolutely do whenever possible. But you know what works even better? Concentrated salvos of fire that your target can't possibly hope to counter. Fire that comes from multiple sources that cannot be fired back upon in one fell swoop, even with a rocket or a super.

So, you want to split your firing angles. The wider you spread your team around a particular skirmish point (while still sticking together and attacking with a shared focus), the faster you'll be able to drop your targets, and the less time your opponents will have to respond. Moving between targets to return fire takes time your opponents don't have when they're under pressure. So if one of you attacks from the left-hand side of a lane, someone else should go right. If someone goes under a bridge on the way into a fight, someone else should attack from on top of it.

This works in terms of proximity too. If you can get one of your mid-range players to lead an opponent out into open ground in view of a hidden sniper, then you create a spread-out team-fire situation your opposition has no chance of dealing with.

Orbit the clash point, don't plow into it

On many Crucible maps, you’ll quickly spot an obvious clash point. It might be a major choke-point through the middle of the map, it might be a wider, connecting area in the middle, possibly holding the central capture point in Control. Whatever form it takes, you’ll recognize it pretty quickly. It will be the meat grinder that both teams continually throw themselves into in an attempt to break through to the other side.

But these pushes are never truly successful. At best, one team will smash through, only to have the clash re-establish itself not long after. And however it goes, both teams will wind up with a lot of dead Guardians and little to show for it. It is dumb, and you are smart, so don't bother with this. Crucible maps always have loads of alternative, intricate side-routes to any given point, so find those, use them, and move smart. You’ll find that you reach objectives a lot more cleanly, and you’ll open up all kinds of flanking opportunities as the enemy team remains engaged with the fruitless choke.

Know when to move, and when to hold a position

Depending on the immediate situation - and the mode you're playing - movement might not actually be necessary. Sometimes it's better to just consolidate your position and let your opponents come to you. Far from putting you on the back-foot, taking a defensive position can actually be the most powerful, offensive move in Destiny 2, just as it was in Bungie's Halo multiplayer. It will take co-ordination, but it can also lead to some ludicrous streaks.

With a held position, you have consistency. You know all of the potential entrances, and you know how they can and can't be used. Your opponents' options are finite, and you can respond to them in a largely prescribed fashion. Narrowing down the possibilities like this also makes it a heck of a lot easier to predict action from the radar. And unless they can coordinate a multi-directional attack, the other team will always be at a disadvantage. They'll either have to pile in together (thus creating a large, bunched up target), or split up, making for drastically weaker, more vulnerable targets.

As for when to do this? Basically, as often as you like in Clash, and selectively in Control. In the latter, you'll ideally want to hold at least two out of the three control points while racking up kills, so if the opposite team starts taking them while you hunker down, you'll have to head out. Unless, of course, you're already ahead on points, in which case just consolidate your position and force them to come your way. They'll have to if they want to score any of their own. Just don't let them.

Stay on the ground (or jump smart)

With the amount of air-time and control you can enjoy in Destiny 2, it’s really tempting to jump and fly around the Crucible on a whim. But don’t. Much like in a fighting game, while aerial play can give you advantages in attack if used carefully and strategically, unnecessary jumping will leave you exposed. Ground-based combat is always a safer bet. Jumping should primarily be used to make a surprise escape when the odds are stacked against you, and you should always be aiming for cover while you do it.

That said, there are certainly ways of using air-time offensively. If you're about to engage a one-on-one battle, kicking things off from a point of elevation can give you an advantage if you can surprise your opponent with it, jump at disorientingly close-range, and do consistent, accurate damage while moving through the air. But if you jump at long distance and fail to do damage while aloft, you're just handing your opponent an easy shot.

Know how to deal with an incoming super

Seeing an opponent trigger their super attack is no longer the end of the world. Destiny 2’s supers now largely built around doing sustained, roaming damage rather than throwing out one-hit kills – leaving the user exposed for a long time if they want to get the best out of their offense. Supers like Fists of Havoc struggle with closing the gap and can be dealt with relatively easily, while Supers like Daybreak attack from range. Pay attention to what supers are used and retreat or sight in appropriately.

Supers are also so much rarer now that you have to wait until using them will truly count - do be aware of their potential use in countering opponents' supers. If, for instance, you see an Arcstrider Hunter popping an Arc Staff at close range, and you don't have time to respond with gunfire, a vertical jump comboed into a Warlock Nova Bomb will lift you to safety from the ground-based attack and let you clear the threat before it can damage the rest of your team. Similarly, a Titan Sentinel's shield-guard move can actually block a Nova Bomb.