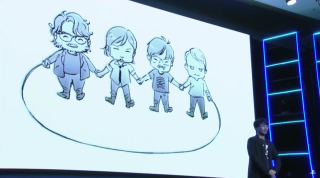 Kojima's been talking more about Death Stranding and its ideas of connecting people. Yes, that is Guillermo del Toro holding hands with Norman Reedus up there - and is that Mads Mikkelsen on the end? This might not be too out there if this story about Mikkelsen working on Death Stranding is to be believed.

Much of what Koj said was what's been covered before, with all the stuff about Death Stranding's sticks and ropes. However, he did suddenly go way off piste and start talking about whales and dolphins beaching themselves, or 'stranding':

As random as that seems, it ties into the game because it involves "something from another world stranding in our world". He then goes on to reaffirm all the stuff about strings: "And strand, the word in psychological terms, means twisted threads and bonds. And this title, the theme is to connect. This is the logo that was designed by Kyle Cooper. It looks like there’s a dripping liquid but this is cord. This is stranding. In Death Stranding there is story game and world view; it’s all connected by strand".

Got that? Good. He then goes on to cover the good old 'can't say too much angle' but does hint (again) at an open world and online side to the game: "The genre is action and it’s an open world with a degree of freedom, and you can enjoy the story at the same time and there are some online elements".

That alien element is interesting and something I've not heard before. I'm also intrigued by the liddle del Toro in the presentation. Shout out to an old friend or a hint he could be getting involved in someway?