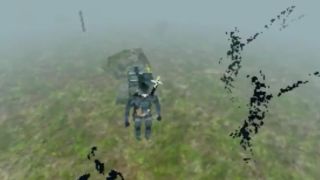 What if Death Stranding was released during the same console era as Metal Gear Solid? Game creator miziziziz shows us the possibility by demaking Kojima's latest game to look as if it was a PS1 title, complete with unnecessarily crunchy footsteps and pixelated natural formations. They uploaded a PS1 Death Stranding trailer on Twitter and added some old-school touches to make it seem even more authentic. Check it out below.

Sam Porter Bridges is looking distinctly less like Norman Reedus and more like the blocky figures of yesteryear as he trudges along on his way to deliver packages and connect a broken and disjointed United States of the future. His BT scanner doesn't flick like in the original game, but flashes on and off because, let's be honest, that's all a PS1 could handle. The BTs are less smoky, otherworldly entities and more collections of inky black dots and you can't even really see the BB, which is appropriate. The landscape is far more murky and the beautiful overcast skies of Kojima's game translate to foggy grey smoke in PS1-era graphics. It's an incredibly detailed and authentic demake, one that will have any PS1 fan feeling nostalgic.

Developer miziziziz created this demade "trailer" in Godot Engine, a free and open source 2D and 3D game engine. The best bit is at the very end when Sam falls down a hill in a hilarious old-school animation that reminds you of both vintage PS1 mechanics and the frustrating feeling of tripping over a pebble when playing Death Stranding on the PS4. Ad oh, that "PlayStation" audio clip at the end of trailer is sending me back.