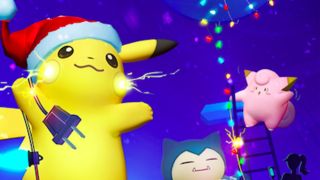 Another Pokemon Go update, another datamine revealing all of its secrets. This week, fans of Niantic's mobile spin on the Pokemon franchise have uncovered new trainer customization options, more progress on shiny Pokemon and Pokemon genders, and most curious of all, the addition of presents. Let's break them down, one-by-one.

Along with the current trainer customization options, the data from the most recent update for Pokemon Go adds "gloves" and "socks" slots. Mayhaps our avatars won't need to freeze their butts off in the cold, and will be able to bundle up this winter?

And now for the big one: presents. There are six different types of presents: Bronze, Silver, Gold, Special, Great, and Ultra. There's no functionality assigned to these gift boxes so any guesses as to what they contain are just that - guesses. Some think the presents are all one continuum of quality, starting from Bronze and ending at Ultra. Personally, I'd wager one set of three is bought with in-game currency, and the other is bought with real-world money. As for how you get them or what they contain? *shrug*

Before you go firing up your app, keep in mind that none of these features are currently live. The code is there, but it's either incomplete or not yet active. We'll just have to wait and see when and if Niantic unwraps the proverbial bow.