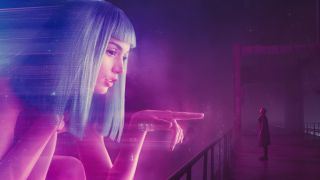 The future is getting dark again. Or at least it’s trying to. Largely missing in action since the late-‘90s, the Cyberpunk genre has been trying really goddamn hard to re-establish itself in the mainstream over the last year or so. Once the dominant – or at least most influential and invigorating – literary sci-fi genre of the ‘80s, and a major shaper of cinema in that decade and its follow-up, the world of grim-dark, neon drenched, near-future hellholes and invasive, revolutionary tech-use has rather diminished since then. Under the weight of flopped movies, aesthetic fatigue, and The Matrix getting way too big and then becoming rubbish, Cyberpunk fell hard and rather fast. But now, it’s trying to rise again.

Between thunderously potent sequel Blade Runner 2049, the appearance of the likes of Altered Carbon and Mute on Netflix, US remakes of classic cyberpunk anime like Ghost in the Shell and Battle Angel Alita, and of course, the upcoming Cyberpunk 2077 video game from the makers of The Witcher, the genre’s looks, tone, and conceits are currently more prevalent than they’ve been in more than a decade.

And there’s more to come. Ready Player One’s bubblegum whirlwind of pop culture nods is going to deliver a lighter, blockbuster-friendly spin on dystopian escape via cyber-reality when Spielberg’s movie version of the book arrives at the end of the month. The Matrix is getting a reboot. Even the long-threatened Akira remake is attempting to spin back up to strike fear into our hearts again, before it hopefully once more returns to nothing.

So what’s going on? It’s easy to throw a simple assumption of ‘90s nostalgia at the question. We are, after all, at the point of the endless, 25-year look-back cycle when the kids of a previous era grow up to be the creatives of the present, and begin to make works tinged with their own warm, fuzzy, youngling memories. Even if those memories are of cold, spiky, sci-fi dystopias, they remain cosy in the mind.

But it goes beyond that. You see, the original birth of Cyberpunk didn’t happen in a vacuum. No element of culture ever does. The move toward dark, cynical, morally grey tales of cool-guy antiheroes on the fringes of collapsed societies, of empowerment through emergent, dehumanising technology, and endless, potentially futile battles against government-strength corporations and the side-effects of the shitty worlds they created, all happened, effectively, because it was the ‘80s.

Days of past future

There were many cinematic responses to this. You can see one of the bigger ones, ironically, in Spielberg’s more optimistic sci-fi works of the time. E.T. is nothing if not the tale of a magical Jesus alien coming down to save a fractured everyfamily suffering in the fallout of economic hardship and divorce. But naturally there was going to be an equal and opposite reaction. And so, in opposition to the hopeful side of desperate, ‘80s social decay Cyberpunk really kicked off.

Why’s it coming back again now? Well look around, compare, and contrast. Corporations are exponentially more prevalent in our lives, and increasingly pretending to be people themselves. Connected computing technology, and its rapid influx into our day-to-day lives, is their primary tool in forcing that relationship. Everyone is a node, a consumer, and a product. Brands are individuals, individuals are brands, and flickering, online portals are the persistent distractions that keep everyone happy and subdued. And the most prominent figurehead for self-promoting, me-first, corporate ‘80s greed is now the President. We are, in many ways, in the sequel to that decade. In fact it’s more like a really shit, grittier reboot.

So the other question, then, is why this second wave of Cyberpunk isn’t resonating with audiences in the way that its originator did. Altered Carbon got a really mixed critical reception – admittedly more for its tonal inconsistency than it setting – while Blade Runner 2049 rightfully got some of the best reviews of the last few years, but tanked at the box office as hard as its precursor did, even with 30 years of reputation behind it.

The live-action Ghost in the Shell did modest profits amid flatlining hype, despite one of the biggest names in the genre and an Avenger in a lead role. Ready Player One is already getting online backlash, and while anyone who’s seen The Animatrix short film compilation will tell you that The Matrix, by the very nature of its concept, still has endless narrative potential, the announcement of the series restart was met with a grand amount of derision. While the quality – and potential quality – of the current Cyberpunk resurgence is variable and debatable, it seems that the fresh and exciting vibe that made the genre such a draw is no longer doing the business.

And that’s understandable, given just how much cinematic and TV sci-fi has slavishly followed Blade Runner since 1982. Creating a profound and distinctive look for its grim urban future, Ridley Scott’s existential detective story did such a good job that very few movies really bothered with designs of their own afterward. I only realised the full, suffocating extent of the saturation when I recently saw Black Panther, and was struck by just how refreshing the look and feel of urban Wakanda turned out to be, in part because its Afrofuturist sprawl doesn’t remotely follow the same over-done, ‘gleaming monoliths, rain, and neon’ model that has been the unquestioned Way You Do Sci-Fi cities for the last 35 years.

The shape of things that have already come

So, genre fatigue, then? Partly, yes. Pure Cyberpunk might not have been around for a while but, with one of the most influential movies in cinema history within its canon, its look has spread everywhere from Tron: Legacy to the 1995 Judge Dredd. The genre-proper might have specific conceits and concerns, but its aesthetic has long-since been diluted.

But I don’t think that’s the only reason that Cyberpunk’s second renaissance has so far failed to ignite. I think there’s perhaps just a disconnect between creator outlook and audience perspective at the moment. Because while it’s the natural instinct of the creator to try to make ‘important’ work - to attempt to commentate, allegorise, and dissect through art - and while today’s political and social climate is a 100% lock-in for a grim Cyberpunk treatment, I’m starting to wonder whether it’s now too late in the real-world for the genre to be the entirely relevant. Because, being utterly, bluntly bleak about things, what was an extrapolated, cautionary tale in the ‘80s and ‘90s isn’t far off where we already are in 2018. There’s just less for Cyberpunk to say now that the world has seen what it was warning against and blindly signed the User Agreement anyway.

Every day, much of the world sells itself online for ironically impersonal personal attention, via networks that profit from – and increasingly manipulate - every last interaction. Everything comes with a sign-up, EULA, or contract, and those hastily signed-off permissions snake their way to an increasingly small number of increasingly large companies, steadily devouring and shutting down anything else in sight in order to make everything a subsidiary of something else.

We are, trenchcoats and shades aside, pretty much waist-deep in Cyberpunk right now. The only difference is that the lighting is better and only a small number of people want to fuck our shitty sex-robots so far. Writers and directors might want to commentate on this by bringing Blade Runner back, but too much of the general populace seems too distracted by the endless datastream of throwaway information in their pocket to care. Cyberpunk is just too quaint now. It’s virtually historical drama.

So is the new wave of Cyberpunk as doomed as I’m pretty much making all of us sound right now? I don’t think so. Because while the trappings of traditional Cyberpunk might no longer be as viable as they once were, the genre’s spirit is finding other corners to hide in. Black Mirror – once of Channel 4, and now on Netflix – has been disguising Cyberpunk technodread under the guise of a Twilight Zone-style near-future sci-fi anthology for a few years now. And Westworld is probably the best current exploration of the kind of Cyberpunk’s particular existential pondering, exploring questions of AI, identity, memory, and free will as deeply as any movie or TV show ever has. And almost all of it in the sunkissed daylight of the sprawling countryside.

So Cyberpunk – much like its own, silicon chip-infused humanity – possibly needs to evolve into new forms in order to progress. Its visions, ideas, philosophies, and warnings remain relevant, and always will, but alas it seems we might have adopted too many of its day-to-day trappings to really notice the shock of the new any more. Allegorical sci-fi and fantasy is effective when it presents a startling, jarring alien world just close enough to ours to draw connections to, and imagines a line between here and there. With traditional Cyberpunk, that line might now be too short to support many stories. But we need to keep paying attention to its ideas. After all, ignoring them left us with crippling Twitter addiction and a willingness to spend $16,000 on an AI clothes-folding robot wardrobe.

We have have got to start paying attention.