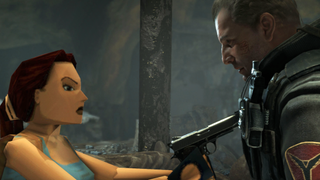 Rise of the Tomb Raider's new "Blood Ties" story mode will give you deeper insight into the Croft family, but insight is for suckers - it's all about that zombie survival "Lara's Nightmare" mode. The Treehouse of Horror-style non-canonical spin off sets Lara on a quest to defend her dilapidated homestead from hordes of historical zombies, and it looks like a Halloweeny blast.

And it all gets very blood-tinged and extra nightmarish starting at 1:20 in this TGS trailer. Though the scariest part is the surprise super-polygonal Lara at the end, if you ask me...

Meanwhile, Xbox has been repping the zombies since August. Tune in at 1:00 to see some of the rotting bastards lurk around, knowing full well that they didn't bring anything for the potluck dinner.

Both Lara's Nightmare and Blood Ties will be included with Rise of the Tomb Raider: 20 Year Celebration when it hits PS4 on October 11, not to mention all of the other game's DLC. And it will also arrive for Xbox One and PC players October as part of the Season Pass in October.