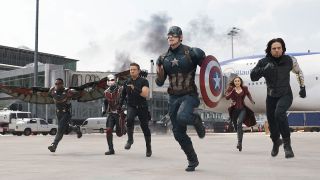 Captain America: Civil War is the thirteenth movie in the Marvel Cinematic Universe, and as such has plenty of history to link to for the eagle-eyed fan, not to mention teasers for future movies. It's a virtual treasure trove of Marvel Easter eggs and to celebrate the DVD and Blu-ray release of the movie, here's a rundown of the best or most interesting references.

I've excluded the obligatory Stan Lee cameo because EVERYONE can spot him these days, and if you're a massive Stan Lee fan you might as well go and see all his movie cameos here instead. Safe to say, if you haven’t yet seen the movie, then stop reading - these Easter eggs will contain spoilers.

You’d be forgiven for having déjà vu when Cap tells Iron Man, “I could do this all day” during their emotional final battle. Proving he’s still the scrawny Brooklyn kid punching above his weight, it’s the exact phrase that Steve Rogers uses in The First Avenger when a bully is beating him up in a back alley, and when Red Skull is beating him up later in the same movie.

Talk about a powerhouse combination. Marvel AND Star Wars in the same movie?! It happens during the epic airport battle, when Spider-Man has a brainwave of how to take down Giant-Man. And that plan is to do what Luke Skywalker masterminded with the AT-ATs in The Empire Strikes Back: tangle the legs up and make Giant-Man fall over.

And talking of Giant-Man, Scott Lang steals the airport fight with the film’s biggest moment (literally) when he transforms into Giant-Man (even if it was spoiled by Funko Pop). In the comics, Hank Pym also makes himself big and goes by the names Giant-Man and Goliath.

Falcon’s nifty drone Redwing is an ACTUAL falcon Sam Wilson shares a telepathic link with in the comics. This allows Redwing to understand orders and Wilson to see what Redwing sees. As much as I’d love to see the brilliant Anthony Mackie deal with a live falcon, I can see why they changed it to a drone.

The person who held onto the Winter Soldier’s activation book is Vasily Karpov, a minor character in the comics who, initially, helped Cap foil a plot by Red Skull. In 1945 though, he found a wounded Bucky Barnes and reprogrammed him to become the Winter Soldier. His MCU version didn’t live quite as long as the comic version though.

6. Spider-Man gets an upgrade

Joining Team Iron Man has its perks as Peter Parker discovers when Tony makes him a new suit for the battle with Cap. In the comics, Tony also made Peter a Spider suit which saw him become known as the Iron Spider when he wore it. The MCU version isn’t exactly the same (for one, it’s still in Spidey’s favourite colours), but the post-credits scene shows Tony gave it one notable comic-inspired upgrade: the Spider-Signal.

Though the assassin and method of death might have been different in the comics, T’Chaka met his untimely demise in the same arena: a political conference. It was during the Bilderberg conference and Ulysses Klaw (who we met in Age of Ultron) did the deed.

Joe and Anthony Russo directed more than a dozen episodes of ace sitcom Community, and have been casting people from Greendale in the MCU ever since. First up was Danny Pudi as a S.H.I.E.L.D. agent in The Winter Soldier, and now Jim Rash appears in Civil War as an MIT liaison. He played a similar role as Dean Pelton in Community, so we hope that’s not the Russo Brothers’ commenting on his acting range.

10. Watch out Hulk, Thunderbolt’s back

No, your mind is not playing tricks on you - you have met William Hurt before as Thaddeus ‘Thunderbolt’ Ross in The Incredible Hulk. Of course, then, he was merely General Ross and now he’s a pain in Cap’s backside as Secretary of State. Ross has also met Iron Man (well, Tony Stark) before in the post-credits sequence for the same movie.

11. Where are Banner and Thor?

And talking of Ross, during a testy meeting, he asks Cap if he knows where Banner and Thor are post-Age of Ultron, which he can’t answer. Seems the Avengers know as much about Thor: Ragnarok as we do, but I’m guessing this means it’ll run parallel to Civil War.

12. Sharon Carter learned from the best

One of the best bits from the Civil War comics (Amazing Spider-Man #537 to be exact) is referenced during Peggy Carter’s funeral. Sharon Carter quotes a life lesson that Peggy gave her, which sees Sharon repeat the last part of Cap’s memorable “no, you move” speech almost verbatim. Who knows, maybe Cap got it from Peggy.

Robert Downey Jr. and Marisa Tomei have history when it comes to flirting. They were the leads in romantic comedy Only You, and we can only hope that Tony will follow up on his belief that Aunt May is “unusually attractive” in Spider-Man: Homecoming. Tomei even gets a dig in at the Twitter backlash to her casting by saying that aunts come in many forms.

True Blood star Alfre Woodard plays a brief, but vital, role in Civil War as the mother who confronts Tony Stark about the death of her son in Sokovia, pushing him to sign the Accords. Woodard will also be seen as Harlem politician Mariah Dillard in Marvel’s Netflix outing Luke Cage, but that’s just a coincidence. Or maybe they’re twins?

15. Bucky set for a promotion?

Post-Civil War in the comics, Steve Rogers is assassinated (unwittingly by Sharon Carter) and Bucky Barnes succeeds him as Captain America. In the movie, there are nods to this mantle-passing when Bucky wields Cap’s shield in the battle royale against Iron Man. Given Bucky is on ice on Wakanda at the end of Civil War though, it might not happen in the MCU for a while yet.

What is it with Marvel and stairwells in 2016? First Daredevil had to spectacularly fight his way down a stairwell in the show’s second season, and now Cap and Bucky do the same once Bucky is tracked down in Bucharest. They all should have taken a lesson from Jason Bourne.

Brock Rumlow clearly hasn’t forgiven Cap for “dropping a building on my face” resulting in scars similar to the ones that Brock, now Crossbones, gets in the comics. Those, however, are a result of developing the ability to fire energy beams from his face (don’t ask), with a further nod to his comic origins in his MCU choice of weapon: spring-loaded gauntlet knives.

In order to take down Iron Man, Ant-Man gets launched by one of Hawkeye’s arrows during the airport battle, echoing the cover of Avengers #223 and the TV animated series Avengers: Earth’s Mightiest Heroes. Is a bromance in the offing?

Despite reports to the contrary earlier this year, Civil War marks the second time that Pepper Potts is only name-checked in an MCU movie with Tony Stark. Gwyneth Paltrow was rumoured to have been part of reshoots for the movie, so perhaps Pepper will pop up in a deleted scene on the home release.

20. Vision and Wanda get it on

In the comics, Vision and Scarlet Witch end up tying the knot and having children, and Civil War looks to be setting the foundations for this partnership. It’s Vision who Tony entrusts to keep Wanda safe (from harming others, mainly), leading to some gentle flirting. Who knew paprikash was the way to a woman’s heart?

21. How Spidey got his webbing

It looks like we might be spared from seeing Uncle Ben die AGAIN in Spider-Man: Homecoming. Over the course of one scene in Civil War between Tony and Peter, we learn Spidey has been fighting crime for six months, his webbing is artificial and he needs goggles to dull his senses. Here’s hoping Jon Watts decides that’s all that’s needed for an origin story.

22. Taking a trip to Wakanda

Despite not yet having his solo outing, Black Panther, AKA T’Challa, is one of the main characters in Civil War. The film manages to fully flesh out the character, as well as set up 2018’s movie. Not only is Martin Freeman’s Everett Ross (a regular friend of the King’s) briefly introduced, but the first post-credits scene takes us into the heart of the Wakandan jungle.

While the movie version of Civil War might only be loosely based on the comic series, but it brings the cover of issue 7 brilliantly to life during the final battle. In glorious slow motion, the camera pulls out to show Cap deflect Iron Man’s beam with his shield. Only they’re not standing on the corpses of Spider-Man and other Avengers.

It could have been a lot worse for Falcon and co after the airport battle royale. The film decides not to use Prison 42 in the Negative Zone from the Civil War comics, and instead takes inspiration from the Raft, which first appeared in Alias #26. It’s no longer in New York’s East River, but that doesn’t stop Cap finding it.

25. Our Spidey senses are tingling

One of Bucky’s trigger words to make him go all Winter Soldier on the Avengers is “Homecoming”, which was recently revealed to be the subtitle of the MCU’s Spider-Man solo outing.

In one of its subtler nods, Civil War makes reference to one of the most notorious moments in the comics, specifically Avengers #213 when Hank Pym hits his wife The Wasp. MCU’s Ant-Man, Scott Lang, tells Black Widow that he doesn’t want to hurt her as ‘I don’t hit girls’.

Entertainment journalist who's an avid FrightFester and genre lover, as well as being a Marvel geek.
See comments