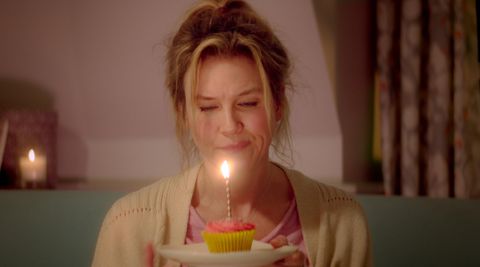 A warm, witty and welcome return – intelligently evolved and an absolute hoot. As Bridget would say: ‘v.good’.

The world has changed since the last time we saw Bridget in 2004. Now we have Tinder, Pokemon GO, emojis, the smoking ban, iPhones, the Sirt diet, JOMO, hashtag culture and a snobbish disdain for Chardonnay. How could the gloriously imperfect Miss Jones and her 20th century obsessions elbow their way clumsily back into our 24-hour, cynical world?

Easily, as it turns out. Based on Fielding’s Independent columns rather than her third novel, BJB re-joins Bridge (Renee Zellweger) after her romance with Mark (Colin Firth) has fizzled and dalliance with professional heel Daniel (Hugh Grant, out of the picture) is dead in the water. Now at her goal weight and a senior TV producer, Bridget nevertheless continues to fall over, say the wrong thing and take disheartening phone calls from her mother (now inexpertly Facetiming).

With all the favourites back for more – the friends, that flat, those PJs – plus sly updates (sweary kids, buzz-kill hipsters, awkward work moments), Bridget decides that she needs more random sex in her life. And consequently ends up pregnant, not knowing whether the key night was a festival frolic with American charmer Jack (Patrick Dempsey) or a pissed-up nostalgia-shag with Mark. And that, deliciously, leads to Emma Thompson’s scene-stealing medic and classic Jones shenanigans...

To give the writer-actor even more credit, one of the most successful aspects of BJB is her doctoring of the passed-around script. Thompson was brought in to polish after various iterations; the resulting romp is brisk, witty, warm, emotional and critically, relevant.

Though there’s clever modernisation with current cameos and age-related anxieties, director Sharon Maguire (who helmed the 2001 original) and Thompson never lose affectionate sight of the core character or the larger female experience. So while we still get the physical comedy of two sparring men (manifested in a brilliantly bungled revolving-door moment), we also get bullseye jokes about childbirth, sex, parenting and work that will have either gender snorting.

Of course, much of the charm of celluloid Bridget originally was down to Zellweger herself and it’s joyous to see that that twinkle in her eyes, funny little shrug and sing-song RP cadence is still very much intact. As is the push-pull of the gents: again managing to replicate the success of the Darcy/Cleaver conundrum by making both suitors equally persuasive. And just in case you’re not feeling warm and fuzzy enough, Maguire chucks in a well-judged flashback montage to make fans blub while also bringing novices into the fold.

The only blue soup in this delightful confection is a too-neat, traditional ending that doesn’t feel brave or modern enough for Miss Jones and her flouting of her mother’s expectations. But quibbles about patriarchal conservatism aside, Maguire and her charming cast have essentially managed a Creed – cleverly revisiting a beloved character without completing reinventing or re-hashing.

A warm, witty and welcome return – intelligently evolved and an absolute hoot. As Bridget would say: ‘v.good’.