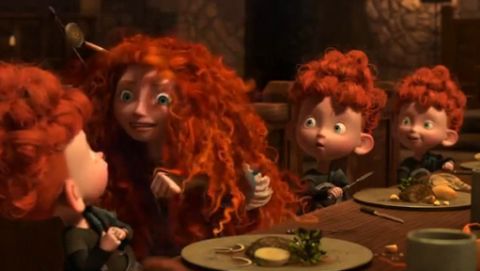 For a while she held the significant distinction of being the first female director to be admitted into Pixar’s hitherto all-male cadre of feature filmmakers.

Not only that, but the film she was charged with bringing into being was Pixar’s first to have a female protagonist, and a princess to boot. The sound of glass ceilings shattering in Tinseltown might not have been audible, but it was hard to miss all the same.

Until, that is, Chapman was abruptly ousted and replaced by Mark Andrews, second-unit director on Mouse House mega-flop John Carter . Feminist breakthrough? Yeah, not so much. “Creative differences” was the catch-all reason given for Chapman’s departure from the project.

Yet when one harks back to how this slice of Celtic cod-folklore was initially pitched, it’s clear John Lasseter and the rest of Pixar’s top brass lost faith in her initial conception - then called The Bear And The Bow - and re-moulded it into something a little less serious, a little more cartoonish and a lot less… well, princess-y.

In many ways the result resembles nothing so much as Tangled , or 2010 pic How To Train Your Dragon , another medieval caper set in a world of chieftains, warriors and Arthurian accessories.

Given that critically acclaimed release represents one of DreamWorks’ better toon forays, the parallel would appear to do Brave proud. Yet Pixar’s history has always been one of pack-leading innovation, not familiar (if unintentional) imitation.

Coming off the back of that spluttering jalopy Cars 2 , the newest vehicle off the Emeryville production line had been looked upon as a film to steady the Pixar ship. Instead it bears all the hallmarks of a studio treading water, as if waiting for a new generation of custodians to propel it into its next evolutionary stage.

Which is not to say that Brave isn’t technically ambitious, fabulous to look at and fun to be around, mostly thanks to a spirited and feisty heroine whose explosion of reddish curls is a triumph in itself.

OK, so tomboy Merida (nimbly voiced by Kelly Macdonald) does feel something of an amalgam, saddled as she is with Mulan’s independent streak, Jessie the Cowgirl’s pluck and the archery prowess of Katniss Everdeen.

Boldly though, this is one Disney princess who refuses to be defined by a Prince Charming, for all her mother’s attempts to set her up with one in the interests of Highland tribal harmony.

Voiced by Emma Thompson, the stately Queen Elinor fills much the same role as Marlin in Finding Nemo : namely, overprotective parental buzz-kill forever trying to keep their mischievous offspring in check. (As well as Merida, she and the burly King Fergus - the easiest of paydays for Billy Connolly - have a trio of unruly boy triplets wreaking havoc in their castle.)

It’s evident from the off, then, that much of Brave ’s drama will be driven by its stern mother/headstrong daughter dynamic, and the friction therein. But how this dynamic develops hangs on a bonkers plot twist that’s so off the wall and out of left field it almost capsizes the entire movie.

We won’t reveal more, apart from saying that it involves a spell cast by a mad witch that in turn maintains a tradition of literal transformation that’s been part of the Disney ethos since as far back as Pinocchio .

The problem is that the Pixar USP is rooted in the fantastical rather than the magical. Their movies, by and large, involve one key idea – talking toys, culinary rodents, suburban superheroes – treated as a fanciful embellishment of an otherwise authentic milieu.

Throw witchcraft into the mix and suddenly anything goes, undermining the strict internal logic on which the Pixar universe depends.

Brave begins strongly, has some fine comic moments and builds to a majestic finale involving a demon bear named Mor’du who once robbed Fergus of a leg and won’t stop until it gets the rest of him. (There’s also a terrific traditional score from Patrick Doyle.)

Yet its weak points (Julie Walters’ eccentric enchantress, the gaseous Will o’ the Wisps that entice Merida to her cottage and the consequences of the fate-changing pastry she coaxes out of her) all spring from a tinkering with the Pixar fabric that is false, forced and ultimately foolhardy.

Speaking of fabric, a symbolically torn tapestry comes to play a crucial role in proceedings. Here’s hoping John Lasseter has a needle and thread capable of stitching his animation power-house across its current creative blip.