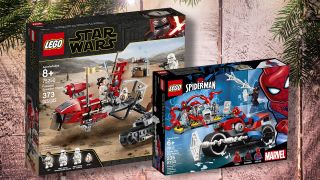 Even though Christmas has been and gone, that doesn't mean there aren't a few cheap Lego deals to be had this Boxing Day. To help maintain that festive cheer, we've scoured the internet for the very best discounts, reductions, and bargains to save you time as well as money.

Boxing Day deals
Got a new console for Christmas? We've rounded up some offers that'll boost your experience.

And there's something for everyone in those sales, no matter whether you're hunting down Star Wars sets with leftover Christmas money or are trying to find Marvel kits for a loved one (or yourself, for that matter).

To kick things off, our team has listed the best prices below to get you maximum value for money on cheap Lego deals. If you stumble upon a bargain, we'd suggest moving quickly though; particularly good offers are likely to be snapped up fast, so grab them sooner rather than later if you want to avoid disappointment.

AT-ST Raider set | $39.99 at Walmart (save $10)
This is a terrific looking walker, and at a reasonable price now too. Save ten bucks on this 500-ish piece set.View Deal

Rise of Skywalker Resistance Y-Wing Fighter set | $55.99 at Walmart (save $14)
A decent saving on a set that goes with the latest movie here.View Deal

Ace Tie Interceptor set | £33.74 at Amazon UK (save £11.25)
A quarter off this nice little kit. Great for a first purchase and to keep busy with over a festive dining table.View Deal

Kylo Ren's Shuttle Starship kit | £73.99 at Amazon UK (save £26.99)
Get 26 per cent off this very cool kit right now and celebrate Kylo Ren in the best Lego-shaped way.View Deal

Thanos: Ultimate Battle set | $55.99 at Walmart (save $14)
Hate him or hate him you can't deny he had a cool ship. Relive it in Lego form with this terrific set.View Deal

Iron Man Hall of Armor set | $48 at Walmart (save $12)
A tidy saving off of this fun set where your Lego Tony Stark can admire his armor collection over and over.View Deal

Avengers War Machine set | £22.49 at Amazon UK (save £7.50)
A neat little set that'll be perfect for after dinner at the table. Only twenty odd quid too.View Deal

Avengers Ultimate Quinjet set | £60.17 at Amazon UK (save £14.82)
A little more expensive but you get a whole fifth off of this set at this price. Plus you get the whole, very cool Quinjet plane/ship/flying machine.View Deal

Hogwarts Whomping Willow set | $56 at Walmart (save $14)
This looks like an incredibly fun set, complete with characters and the flying Ford Anglia car.View Deal

Hagrid's Hut: Buckbeak's Rescue set | $47.99 at Walmart (save $12)
An iconic scene and sequence in the film and the book, relive Buckbeak's rescue in tiny Lego form and enjoy it all over again.View Deal

Hogwarts Express Train set | £60 at Amazon UK (save £14.99)
A must have, in a way, for Harry Potter Lego fans. Get the infamous train for less this festive season.View Deal