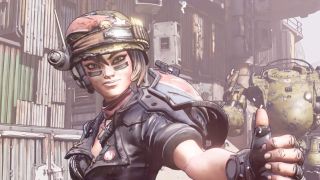 Elon Musk and his Boring Company ‘Not A Flamethrower’ flamethrowers became something of an internet sensation last year, so much so that Randy Pitchford apparently intends to include a reference to the fire-spewing gadget in Borderlands 3. I promise this isn’t an April Fools’ joke. The Twitter exchange between the two implies that a Borderlands 3 Elon Musk Flamethrower could very well become a thing, and Musk himself might even write the flavour text for the gun, and boy, that’s something I need to see.

Elon - I’m going to add this to our next Borderlands game. Super serious. Let me know if you want to write the flavor text. You may have already done so - we’ll just lift it from one of your tweets.January 29, 2018

Borderlands has always been famous for including straight-up ridiculous guns, including one called Bane that just screamed at you whenever it was fired (fun fact: voiced by Ashley Burch of Aloy fame), another one that shot swords, and finally a gun that shoots bullets in an X formation. So including a flamethrower which has a ‘cryptocurrency’ safeword and includes a free blockchain is really not that out of the ordinary, to be honest. How would a safeword even work? Does your character yell it aloud when they’re reloading, or does the gun say it when it’s run out of flamer fuel? I wouldn’t put any of it past the minds behind Borderlands 3’s weapons. Plus if you look in the recent Borderlands 3 trailer you can see that there’s a very brief glimpse of a flamethrower in use - perhaps it’s Musk’s flamethrower in action. Guess we’ll just have to wait and see...

If you want more details about Borderlands 3, check out our Borderlands 3 trailer breakdown or give the video below a watch!