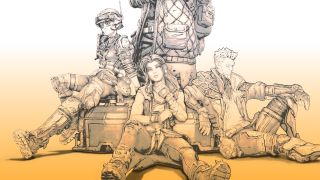 Borderlands 3's gang of Vault Hunters is still a partial mystery. We know their names and basic abilities, but we've only seen skill trees for Amara and Zane (here's where you can view the Borderlands 3 Amara skill tree and Borderlands 3 Zane skill tree, if you're curious). Plenty of questions remain, but Gearbox recently shed a little more light on the new A-Team in cosplay guides highlighting the Vault Hunters' design and origins.

These guides are meant to give cosplayers a clear reference to use when crafting costumes, but even if you don't plan on physically becoming a character, it's still fun to get a closer look at each character's outfit and features. If you want to view or download these cosplay guides for yourself, you'll find them archived here. Read on for a look at what they tell - and show - us about each Vault Hunter.

"A hero born in the slums of Partali, Amara is most at home on the battlefield or in a brawl. Never content to stand idly by, she uses her Siren abilities to smash oppressors and dismantle her foes. While in her Phasetrance, she channels her Siren energy to form powerful arms that can shoot blasts of force or crush enemies in their grasp. Brash, aggressive, and self-assured, Amara doesn't let anything stand in her way."

One detail I never noticed before is that Amara's class mods are scrolls - like, straight-up Elder Scrolls-looking scrolls. Amara has a pretty tough look overall, but the scrolls fit the rich and mysterious Siren legacy. I dig it.

"An emergent AI driven in an ongoing quest for self-discovery, FL4K wanders from world to world accompanied by beasts. While they feel a connection with the primal wisdom of animals, the social constructs of humans are strange to them. On their endless hunt, FL4K's loyal Skag, Spiderant, and Jabber companions help them track and claim their quarry, be it human, Vault Monster, or anything in between."

FL4K has the silhouette of a mid-level character in The Division 2, but their getup is so detailed that I can't hate it. I love the spiked doggy bowl lashed to their backpack. I like to imagine their three animal companions fight over it. And their class mods are plushie versions of their companions! What's not to love?

"Once a soldier in the Vladof army's Ursa Corps, Moze left their service to pursue her own mercenary interests and hunt for the Vaults. When the going gets tough, she can use her digistruct pack to summon her heavy mech 'Iron Bear' and face down an army without flinching, using powerful mounted weapons to mow the opposition down. A veteran of wars from across the six galaxies, Moze and Iron Bear are a force to be reckoned with."

Moze looks like a proper soldier, but I think Iron Bear is the star of this guide. This feels like the best look we've gotten at the mech, and it looks way cooler than I envisioned. When I heard "Iron Bear mech," my mind went to, like, mechanized Misha from World of Warcraft. Turns out Iron Bear is just an absolute unit with gatling guns for hands. I'm down.

"Zane Flynt, brother of the infamous bandits Captain and Baron Flynt, has been around the galactic block more than a few times. Over the years, he's worked for, against, and along with every major corporation conducting espionage and assassinations for the highest bidder. With cutting-edge technology and decades of mercenary experience, Zane uses his Sentinel Drone and other gadgets to disorient, disrupt, and destroy his targets."

Zane's got a fierce look to him, and I especially like the Spider-Man logo on his jacket - who knew he was a comics fan - but I think his backstory is the most interesting part of this guide. He has one of the most expansive arsenals of any Vault Hunter and can even use multiple action skills simultaneously, and it's cool to think those skills were developed over a lifetime of for-hire ass-kicking. And I do mean a lifetime, because Zane is also bringing some much-needed representation to the silver fox demographic.