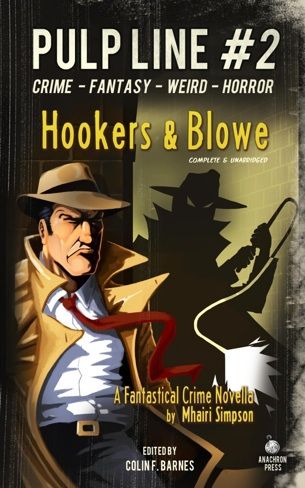 There are certain professions that straddle the line between life and death. Paramedic and hospital staff, firefighters and the police in particular all find themselves with one foot in each camp, either working to keep people alive or finding out why they died or, on occasion frantically trying to stop more people from dying. It's a task as horrifically difficult as it is desperately honourable and that's both the best, and the worst, thing about it. I've had family members in this sort of work and I know both the toll it takes and the rewards it brings.

The price of this sort of work is, most commonly, burn out and that's where Amhairi Simpson's novella starts. Detective Constable Robert Blowe has hit that point, having spent an entire career working hard not only to put criminals away but to put his horrible past behind him. Blowe hallucinates, or tells himself he does, seeing odd creatures and people at times, but just works through it. It's not that he's unhappy, it's just that he isn't happy. But at least his life has balance.

Then, one day, he's called to a murder where the victim apparently died of fright. And all he can think of is watching something horrible happen in his childhood. Now, Robert Blowe finds himself facing an enemy that embodies everything he stands against and that seems to know him.

This sort of story isn't new. After all turn Blowe from "Hard Bitten Police Officer" to "Student" and you've got Sam Winchester. But what Simpson does here is take the tropes of this sort of story and apply the exact same rigorous exploration and logic to them that Blowe does to his cases. This is a story about someone discovering the supernatural world around them, certainly, but unlike the usual failure to accept or straight out denial that tends to blight these stories, Blowe... gets on with it. He's not happy, he's not comfortable, but he's a detective. The only difference between this case and every other one he's ever worked is that the perpetrator isn't even a little human. However, killers are killers and evidence is evidence and Blowe investigates with a combination of tenacity and adrenalin-fuelled terror that's genuinely refreshing. He reacts the way a normal person would, which makes the horrific case he finds himself caught in all the more effective.

This is the second clever thing Simpson does; the exact nature of the killer (The "Hooker" of the title) is simultaneously ghastly and weirdly… British. There's something truly ghastly about his method of feeding, curdling something old-fashioned and traditional into a ghastly method of sustenance. The killer is a constant threat too, someone who Blowe can't possibly hope to outmanoeuvre but can, maybe, out-think. This isn't a fair fight, not even close to one, and that, along with the nature of the two main characters, makes for a thrilling, fast-paced read.

However, what really makes this fly is the way Simpson nests Blowe's discovery of the truth into a look at a fascinating supernatural underworld. Blowe, once he accepts what's happening, finds that everything he's been discovering has been an open secret for years. He's not the only police officer to realise what the Hookers are doing, and the criminals are just as aware. Suddenly, Blowe finds his network of contacts, whilst still in place, is feeding him very different knowledge and that helps him transition across to the new way of things almost effortlessly. It's not even a new world, it's the one Blowe has always been part of, it's just that now he can see it for what it truly is. The end result is an unusually smooth transition, as Blowe finds himself very comfortable with the new way of things, even as he gains a new sidearm (with a very old history) and help from an unusual sidekick and a frankly terrifying succubus.

Done wrong, Suzanna could embody every single tedious stereotype about Succubi, but here, once again, Simpson absolutely knocks it out of the park. Suzanna is almost elemental in the book, so overwhelming to Blowe's senses that he can't let himself fully perceive her. She's smart and playful and clearly knows a lot more about what's going on than anyone else. Just like with Blowe, the Hookers and the story itself, Suzanna transcends her roots and becomes a fascinating, and very dangerous, character.

Hookers & Blowe is pulp done right. Simpson takes old thread and spins something new and fun and smart with it, creating one of the most likeable “pilot episodes” I've read in years. Shot through with energy, invention and a jet black, bone dry wit this may be the last normal case DC Blowe works, but it deserves to be the start of a new career and it absolutely deserves your time.