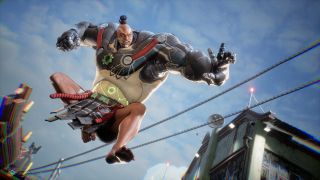 The first Bleeding Edge beta is now live as of Friday, February 14, 2020. This is the first of two planned betas and will run through Sunday, February 16. The game will return for another beta on Friday, March 13, and while Ninja Theory hasn't confirmed the end date for the second round, it will likely be another weekend affair.  You can check the times for the beta using this handy infographic provided by Ninja Theory, and you'll find sign-up and participation details below:

If you didn't play in the alpha or pre-order the game, don’t worry. You can still get into the closed beta if you have an active Xbox Game Pass subscription. If you’re in that group, or if you played the alpha on Xbox or Windows, Ninja Theory says to look for the app in the store.

Participating in the first beta will net you the Amor Heart hoverboard trail, an in-game cosmetic styled after Valentine's Day. This is separate from the Punk Pack which you get for pre-ordering the game, and which includes several character skins and the Rioter's hoverboard.

Ninja Theory is most recently known for Hellblade: Senua’s Sacrifice, but Bleading Edge takes a drastically different approach to its tone and combat. Hellblade was a bleak look at one woman’s grief-stricken journey through the Norse underworld, while Bleeding Edge is a colorful PVP hero brawler where the characters are loud, bold, and mechanically augmented. The connective thread is the melee combat, though, which is something Ninja Theory has been dedicated to for years, dating back to games like Heavenly Sword and Enslaved: Odyssey to the West.

Bleeding Edge hits Xbox One and Steam on March 24 and will be available on day one in Xbox Game Pass.

If you’re debating whether to play Bleeding Edge, our hands-on impressions may sway you.