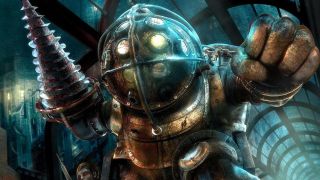 Would you kindly make this happen? The Mortal Kombat movie writer says “he’s been elbowing everybody” about bringing BioShock to the big screen.

Greg Russo, who has his fingers in a couple of video game movie pies across the next few years, has opened up about his plans for a potential BioShock film franchise – and they include going big on the horror elements of the games.

“I would love to figure out a way to do BioShock and I’ve tried,” Russo told ComicBook.com. While he didn’t go into specifics about who he’s been in contact with and what his take on BioShock would be, Russo said: “I've been like elbowing everybody I can possibly find, because I think I have a really awesome way to do it that would be really fun.”

There is one certain element, though, that Russo would love to transfer to the big screen: horror. In fact, his two cornerstones of a BioShock movie are “bringing the horror of it to the forefront and [to] hopefully keep the budget at a manageable price.”

Just picture Andrew Ryan’s underwater utopia of Rapture brought to life on the big screen. Now, imagine splicers and Big Daddies lurking around every shadow-filled corner. Add in that twist and you could be on to a box-office winner.

Don’t expect it to happen anytime soon, though: Russo is hard at work on the 2021 Mortal Kombat movie (and has already revealed that it’ll have an R-Rating and fatalities), plus he’s attached to a Resident Evil reboot according to IMDb.

The BioShock movie adaptation might seem dead in the water before it’s already begun but there’s still hope, just as long as Russo keeps elbowing the right people.

Will the circle of so-so video game adaptations be broken? Maybe it already has been: here are some of the best video game movies.