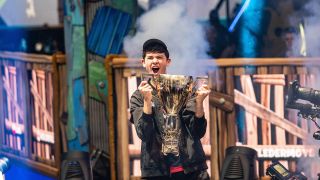 With the cheers from the Fortnite World Cup Solos Finals still ringing in our ears, we couldn't help but wonder what kind of World Cup we could win. An Overcooked contest in front of thousands of fine dining fans? A Dance Dance Revolution shimmy to the death?

I recently saw an interview with the parent of a Fortnite World Cup competitor, who boasted that thanks to the game, her child now has a level of teamwork and communication that others his age don't (of course she'd say that, her 16 year old can now afford to buy her a house). But that instantly made me think of Overcooked. I can't think of any game as demanding of your ability to coordinate, communicate and manage your anger quite as much as that game. The moment you hand off a perfect plate of fish and chips to be delivered by your partner, only for them to fall between moving icebergs, respawn without the dish and cost you the game, requires a level of restraint equal to that of an Olympic athlete.

I'd also like the gibberish-speaking Onion and his pet dog to commentate. For reasons. Ellen Causey

With breakdancing being considered for the 2024 Olympic Games (yes, really), now seems a good a time as any for competitive dance to undergo a revolution. A Dance Dance Revolution. Just imagine everyone rocking up to arenas in their best spandex and headbands, pulling off their best Bryan Cranston on Malcolm in the Middle impression. It’d be amazing. Plus, it’d be a thumb to the nose for those naysayers who have stuffily dismissed the Fortnite World Cup as nothing more than a child's pastime. A Dance Dance Revolution World Cup would get everyone up, active, and showcasing their best dance moves. Just like most of my Friday nights on the town – and only slightly less embarrassing. Bradley Russell

What a hilariously fun, hot mess of a game. If Mario Party and Tony Hawk's graffiti mode had a love child that lived solely off of Monster energy drinks and slept on top of a sub woofer, that baby would be Fuzion Frenzy. I used to play it at my cousin's house during the holidays and would have to be physically pried away from it. Four players face off in a variety of mini games, which include (but are not limited to) Victim, AKA hot potato with a live bomb, Sumo, AKA sumo wrestling but in hamster balls on a crumbling platform suspended over questionable urban fluid, and Paint Panic, AKA SPRAY PAINTING GIANT BUGS YOUR CHARACTER'S IDENTIFYING COLOR. As far as the Fuzion Frenzy World Cup would go, you could either have a massive mini game face off and keep track of the winners of each before naming a Fuzion King, or simply play the in-game Tournament mode (you just wouldn't be guaranteed to play some of the best mini games). Very few games feel so specifically a product of the aughts as Fuzion Frenzy does. Alyssa Mercante

Getting Over It with Bennett Foddy

Bennett Foddy created Getting Over It "for a certain kind of person, to hurt them." I am that person. I'm hurt. This 2D rage simulator was explicitly designed to aggravate. It takes a while just to get used to its wonky controls - think rowing but using a sledgehammer and with a cauldron strapped to your ass - let alone make any progress, and that progress is so easily lost. If you fall once, that's it. Square one. It's horrible, yet un-put-downable, so of course speedrunners have mastered it. People have turned Getting Over It into an art, so I reckon it deserves a proper tournament. The Getting Over It World Cup could even have multiple brackets - one for standard speedrunning, one for playing the mobile version (with touch screen controls), and - obviously - one for playing blindfolded. Contestants would have to sit in actual cauldrons while playing, obviously. I'd kill to see that. Austin Wood

Nintendo has run some official Super Mario Maker 2 competitions in the past, but they typically just focus on the "play" part of the game. I want to see a championship that embraces the Maker part above all else. Assemble the participants from the ranks of YouTubers, streamers, and - most importantly - top-rated level makers. Give them each, say, 45 minutes to design and clear a level with a few playfield-leveling regulations like "No Hidden Blocks". Then come up with some kind of complex scoring system to account for both how many competitors manage to clear their stage and how many stages they clear themselves (I dunno, I'm not a tournament designer). That I would watch. Connor Sheridan

I could watch people play Gang Beasts all day. The sounds of screams and laughter as gelatinous humanoids tumble over each other across a series of precarious environments is party game entertainment 101 but, when the competition gets serious, the intensity of a Gang Beasts tournament is just as engaging as its capacity for jocular merriment. If you've ever had a 1v1 on that truck level with the oncoming signage, or managed to throw someone onto the subway tracks, only for them to pull you in with them just as the train is about to steam through, you'll know what I'm talking about. Imagine that, but to the chants of thousands watching in awe at Wembley Stadium, and you've just imagined my perfect idea of a world cup. Alex Avard

In today’s ‘blatantly obvious’ news, Battle Royale games are a pretty Big Deal… and I’d argue that Apex Legends is second only to Fortnite, the dab-fueled granddaddy of them all. It’s a hard-won honor. Respawn Entertainment broke onto the scene earlier this year with the subtlety of a breach and clear SWAT maneuver, and I’ve been hooked ever since. Titanfall’s spiritual successor grabbed me in a way Fortnite never did; as it turns out, mixing Titanfall 2’s stellar gunplay and movement, wordless in-game communication (which is still a stroke of genius, by the way), and quirky, memorable characters was something of a good idea. So where’s our Apex Legends World Cup? Considering the tension-filled gameplay and emphasis on teamwork, it would be the perfect fit. I’m sure we won’t be waiting long before an official tournament arrives, though. There’s already a $500k invitational coming this September, so it’s the next logical step. Benjamin Abbott

For anyone that doesn't play, this would be the most boring thing to watch in the world. For those who do? It would still be pretty boring. For those of us who are truly addicted to the best football (soccer) game out there however, seeing top managers export their best teams from their own careers and go head-to-head with managers from around the world in a tournament based off the actual World Cup would be incredible. I reckon I could compete too; my Aston Villa squad which has won back-to-back Premier League titles with Jadon Sancho and Fransisco Javier on either wing, with the monster that is Godwin Uwakwe up front would be a formidable force but never have I had the chance to actually play against another real person to see how it compares. Like I said, this wouldn't be interesting for most players, but for a small few, there could really be nothing better. Ford James