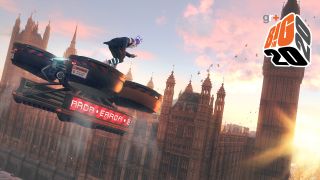 Anyone who kept up with E3 2019 last year could tell you who stole the show at the annual gaming expo that summer. It wasn't Phil Spencer, and his ever rotating wardrobe of conveniently on-brand t-shirts. Nor was it Bam Bam, Jon Berthnal's adorable pit bull, seen here promoting Ghost Recon: Breakpoint with all the enthusiasm that game deserved. It wasn't even Keanu Reeves, breathtaking as he is. Instead, the internet unanimously bestowed the E3 GOAT award to Helen, the septuagenarian supersoldier who stole the show at Ubisoft's press conference with her appearance in the Watch Dogs Legion trailer.

"When we announced the game at E3 and Helen became the breakout star, our team went wild," admits Sean Crooks, lead producer for Ubisoft Toronto. "They were all sharing links of news and streams. To have such positive feedback on our reveal after years of working on the game, and to have so much ongoing anticipation, it’s really fantastic validation and a great motivator for our team as they work on the game."

Watch Dogs Legion, of course, isn't just about Helen. Far from it, the game's leading USP is its ability to let you play as anyone and everyone in its depiction of post-Brexit Britain. NPCs, effectively, are now just 'PCs', thanks to one of the most ambitious gameplay systems this side of the generation, and indeed the next, as Ubisoft has already confirmed that Legion will be available on PS5 and Xbox Series X in future.

That aforementioned setting, a cyberpunk flavoured portrait of Britain on the brink of total collapse, sounds like a dicey choice for a company that has famously erred away from accepting the political ramifications of its subject matter, but Crooks assures us that it's fertile ground for a game all about enfranchising the player with unshackled access to London's vox populi.

"The story centres around a group of people ready to stand up and fight back to free London from the oppression of an authoritarian regime," he says, adding, "this context allows for a multitude of gameplay opportunities."

"The player experiences an alternate version of a near future London at a critical moment, where there is a total chaos economically, politically and socially. We wanted a setting and period where society and humanity is at the eve of some of its most astonishing progress and discoveries but at the same time risks losing it all to war, violence and profiteering."

That's not to say Legion is a brooding polemic devoid of the light touch and sparky personality that made Watch Dogs 2 such a joy to play, though. As Helen's show stopping debut proves, Ubisoft Toronto is embracing the whimsical absurdities of its concept with gumption, mining all the black comedy it can from the news toys it has to play with, whether that's permadeath or the potential of hacking in a city now totally dependent on the technology seen in previous Watch Dogs games.

Players can ride atop giant drones to infiltrate enemy bases, unleash armies of robot spiders to turn the tide in a gunfight, or equip invisibility cloaks and perform clean stealth runs for a more clandestine approach to the revolution. All of this is backed up by a brand new class-based system that suggests Watch Dogs is following Ubisoft's other major property, Assassin's Creed, in the transition to a full role-playing experience. Given how that unexpected pivot gave us two of the best Assassin's Creed games of all time with Origins and Odyssey, that can only mean good news for this comparatively nascent franchise.

Ironically, in a prescient mirroring of the Brexit timeline itself, Watch Dogs Legion saw a significant delay at the end of last year from its original March 2020 release window, with Ubisoft yet to offer an update on when the game is now expected to launch. Crooks says that the team is "taking the additional time to ship Watch Dogs Legion at the best possible level of quality and bringing the 'Play as Anyone' innovation in our near-future London to life in the way it deserves."

"Our goal is to ensure the game is the immersive, innovative experience we set out to create," Crooks continues, "and the one our players are excited to play. We will have a lot more to share soon."

In truth, a project this ambitious needs all the development time it can get, and - following the creative and commercial bankruptcies surrounding its recent output of titles - Ubisoft needs Legion to be the game-changer that it's trailers are suggesting. With that in mind, there's every chance that Legion could mark another Black Flag-style turning point for both the Watch Dogs franchise and Ubisoft itself, one which reminds us why the company is one of the most valued and relevant forces in the industry today. A lofty expectation, to be sure, but an admirable one, nonetheless.