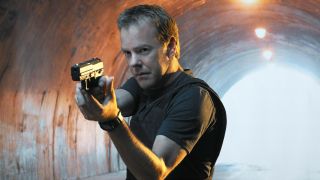 Whether your favorite show is on Netflix, in a boxset or actually airing on your telly box, there's some truly phenomenal TV out there right now. From political dramas, to sci-fi, to vigilante escapades and violent fantasy - there's something on no matter what your tastes are. But which TV show is the king of them all? We've gathered a list of the pinnacle of television greatness to set an example that all future programmes should follow. Here's the very best TV of all time.

Over eight blood-splattered seasons Dexter thrilled us with its unique take on the serial killer story. Dexter himself plays both villain and hero, killer and cop, and the tensions between these roles is where the show truly shines. Sure, the finale is very wobbly, and the storyline between Dex and Deb gets... uncomfortable. But the first few seasons are some of the best TV out there, and the Dexter himself remains utterly compelling to the very end.

It’s gross, it’s offensive and it’s crudely made. These are all reasons why many continue to love South Park. In a world of conservative television, the potty-mouthed adventures of these eternal schoolkids are deliciously subversive. Some may say it’s puerile and dumb – and it often is – but there’s a sneaky sense of decency that ensures the show is more than just a lot of swearing and wiener jokes. Though they are good fun too.

Doctor Who’s appeal is obvious. It’s the show that can go anywhere and do anything. And while other shows wear out their popularity, Who’s unique central character, an alien time traveller who changes his entire identity every time he 'dies' by regenerating, ensures that it’s built for longevity. Where most SF shows aim for cult status, Who is inclusive, appealing to adults, kids and grandparents alike. It’s a global phenomenon now, but at home in the UK it’s something greater: a national treasure.

A young woman is murdered and the investigation has consequences for everyone it touches. Deceptively simple, The Killing spawned two sequels, a multi-season US remake and led the charge for 'Scandi-Noir' as a TV genre. The show is tightly paced, involving and Sofie Gråbøl as Chief Inspector Sarah Lund is a magnetic, cautious heart for the story. Plus her jumpers are the stuff of TV legend.

In a world of easy cynicism, Parks & Recreation is good-natured, sweet and optimistic. What started as a promising, if unspectacular, twist on The Office (US) rapidly found its own voice thanks largely to Amy Poehler’s performance as Leslie Knope, a minor civil servant with big plans. This is a show about people trying to do their best, failing regularly, but occasionally getting results. It gave us Chris Pratt before Guardians Of The Galaxy and it introduced the immortal Ron Fucking Swanson.

Yep, it’s another American crime show that features a dead girl and ritualistic murders. But True Detective instantly stands out with its eye-catching casting of Matthew McConaughey and Woody Harrelson. Behind the scenes, employing the same writer (Nic Pizzolatto) and director (Cary Fukunaga) for each episode leads to a beautiful consistency. Stealing influence from pulp horror and comics, and with a playful story structure, it's one of the most exciting new shows of the past five years. Shame about season two...

24 is one of the most ridiculous television shows ever made. It’s also one of the most exciting. The adventures of Jack Bauer – surely the world’s unluckiest man – unfold in real time, each episode filling in the corresponding hour of his day. Tough, unflinching and sometimes heartbreaking (George!) it’s relentless viewing. Kiefer Sutherland’s career was revitalised and who didn’t love Mary Lynn Rajskub’s a-dork-able tech-whizz Chloe?

The hottest TV show of 2016, HBO's lavish sci-fi western (yup, that's a thing) tells the story of a massive 'theme park' inhabited by mechanical humans called Hosts. Essentially created to be killed, raped, and abused by anyone rich enough to buy time in Westworld, the Hosts decide - in this first season - to take the power back. That's a grossly over-simplified summary of a show that's smartly written, slickly produced, and wonderfully acted. There's a reason this was the most acclaimed TV show of last year - watch it now.

Netflix further cemented its hit-making credentials with this reinvention of the ’80s British drama. Boasting no less than Kevin Spacey in the lead as ruthless congressman Francis Underwood, it broke records becoming the first online-only drama to receive major Emmy nominations. It’s no surprise: this is political drama at its most sumptuous and shocking.

21. Orange is the New Black

Sentenced to 15 months in prison for a crime she committed a decade ago, Piper Chapman struggles to survive, along with the rest of the women serving time with her. A unique piece of TV (and based, albeit loosely, on a true story), Orange is brutal, compassionate and hilarious. One of the most intense shows on this list, but also one of the sweetest, it keeps you on your toes as much as it does Piper.