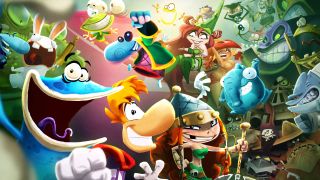 Our pick of the best PS4 split screen games is perfect if you want to get really engrossed in a game with your partner this Valentine's Day. Okay, so they might make or break your relationship, but there’s really nothing quite like jumping on the sofa with some snacks and getting stuck into some co-op. Let’s not let bygones be bygones! Drop your mates a message and dig into one of these couch co-op classics on PS4.

Yarny! You remember little red Yarny, don’t you? The surprise turn from EA that became the underdog star of E3 2015? If not, you may not know that its success warranted a sequel, the imaginatively named Unravel Two, an adorable companion platformer that launched during E3 2018. And by that, I mean immediately during the conference, which is why few people took notice. A crying shame, as it’s a lot like playing Inside or Limbo with a partner in tow. The environments are inspired, the puzzles are charming and it's nice and accessible. Give it a go!

Nobody could believe it when the Knack came back for second servings in 2017. A walking, talking particle prototype, the internet has an eerie reverence for Mark Cerny’s mascot platformer, which happened to be one of the PS4’s original launch titles! It provides quite the tactile experience in couch co-op as you solve puzzles, hop platforms and wallop goons together. Even if you’re playing it through a thick veneer of irony, Knack 2 is well worth the effort if you’re a fan of old school couch co-op. They don’t make ‘em like this anymore (and there may be a reason for that…)

For the anime fans out there, you can’t get much better service than Dragon Ball FighterZ, a sprawling fighting game that drafts in most of the conceivable characters from the iconic Akari Toriyama franchise. If you’ve ever wanted to go Super Saiyan on your friends for spilling the salsa on your parent’s new rug, you can indeed batter them into space with a spirit bomb from Goku whilst you’re sitting side by side, munching nachos on the couch. FighterZ supports local play and has a dynamic battle system with a high skill ceiling, meaning you get out what you put in if you turn it into a regular occurrence and become a master Frieza or Majin Buu.

A wonderfully inspired brawler that pulls from the rich well of Mexican mythology, Drinkbox Studios’ Metroidvania series is a deeply underrated couch co-op experience. Jumping into the strapped shoes of a powerful set of luchadores, Guacamelee 1 and 2 will take players on a rip-roaring adventure through Mexican mythos, as you punch kick and platform your way through a variety of inspired environments. Guacamelee demands a good bit of coordination and isn’t as simple as holding right and steamrolling through the enemies, with scaling difficulty and combos made necessary for defeating the rogue’s gallery of foes you find in its eye-popping world.

A dungeon crawler that needs little introduction, Blizzard’s Diablo 3 has had something of a comeback story since its rocky launch on PC in 2012. You can now pick up the Eternal Collection on PS4 which features the base game and its bumper expansion Reaper of Souls, as well as the Rise of the Necromancer character pack. The definitive experience of the game, you can’t go wrong with jumping into four-player local co-op in Diablo III, where you’ll all share the same screen (but still fight over the loot). Adventure through dank dungeons and petrified forest glades as you level up and craft your ultimate character builds to eventually take on the game’s legion of boss battles that reward coordination and communication.

Matt Thorson’s precursor to the excellent 2018 smash hit Celeste, Towerfall Ascension is a contained battle royale where players pelt each other with arrows in a tiny arena. If you’ve ever played Nidhogg you’ll be pleased with the pace of this lightning-quick skill shot-focused platformer which can be enjoyed with four friends on a couch. Towerfall is best played in good company - it doesn’t demand so much of its players and can be picked up and put down with relative ease. You can even modify the rules of the game to fit your specific group’s tastes or just mix them up to usher in a little chaos.

Turn to page two for more of our best PS4 split screen games...