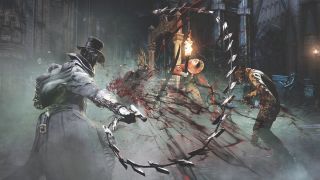 There are good games, and then there are games so good that repeat playthroughs aren't just warranted, but necessary. However, the thought of starting from scratch, no longer in possession of your favourite weapon of choice or all that XP you spent so much time accruing, is a real big turn-off. You want to enjoy the adventure again, but without any of the grind, or at least with a fresh perspective that allows you to play in new ways. These are the kind of opportunities which a new game plus mode (NG+) presents.

Some might call if arrogant for a developer to include a mode which automatically assumes their players will want to replay the game all over again but, really, it’s a smart way of extending the sea legs of the single player experience, encouraging replays with spiked challenges, gameplay tweaks, and carried over progression from your first playthrough. With the recent news that Assassin’s Creed Origins will be getting a NG+ mode in the near future, now’s the best a time to look back at some of the finest available examples.

The Witcher 3 is a good game. You know this. I know this. We all know this. Even without NG+, it’s an RPG worth replaying for its crunchy dramatic beats and endlessly jaw-dropping scenery. But CD Projekt Red threw in a free NG+ mode as part of its commitment to supplementing the game with complimentary DLC, and that makes a second playthrough almost irresistible for the fantasy fanatics.

Your NG+ experience on The Witcher 3 will be scaled accordingly to the level you completed the campaign at, so you can expect a healthy challenge without fear of being overwhelmed by high powered enemies. All of your gold and most of your gear will carry over, too, while newly scaled weapon and armor sets means that there’s still motivation to hunt for better loot across Nilfgaard. Sadly, your Gwent card collection doesn’t carry over, so no easy tournament wins for you.

Borderlands 2 thrives on the promise of its eternal waterfall of new guns, gear, and loot, making it difficult to part ways with all your best booty for the sake of restarting Gearbox’s subliminal FPS adventure. Thank goodness for True Vault Hunter Mode, which allows players to carry over their experience and equipment into a second campaign run, along with any other players who are up for the challenge.

And it’s a challenge alright. Adversaries have higher health, there’s more badass enemy types running around, and all of their levels are scaled to yours. As a reward, True Vault Hunter Mode promises a higher chance for rare loot drops and more XP from completing each new mission. Plus, once you’ve complete that, there’s Ultimate Vault Hunter Mode, which amplifies all of those gameplay tweaks for a purist, proper hardcore third replay. Hooray!

Can you really label Nier: Automata’s post-campaign content as a NG+ experience? It’s hard to say, but that indescribable creativity is exactly what makes it so great. Automata uses a player’s desire to keep going beyond the credits as the spark to ignite forms of storytelling never before seen in the medium, as it continually pushes the boundaries of what we previously thought it was capable of.

The less I say about how Nier’s multiple ending system works, the better, but the uninitiated should at least know this. It’s unlike any other NG+ experience you’ll have ever played, and one of the few which are essential to see for yourself, even if you’ve never had much of an appetite for replaying single player campaigns.

Remember your first few hours in Yharnam? An intense, harrowing series of defeats as you’re repeatedly battered and bruised by those dastardly villagers with the torches and pitchforks? Imagine going back there after completing the campaign, with all your acquired plunder and combat experience, to pay them another visit; only this time, it’s you who’ll very much be doing the battering.

Bloodborne’s NG+ mode lets you do just that, resetting the game to the beginning, leaving you with all your equipment, blood echoes, and levelling progress from your first playthrough. Don’t expect a cakewalk, mind. This is still FromSoftware we’re talking about, and NG+ mode ramps up enemy health and damage to maintain the harsh intensity of the hunt. Downed foes will drop more blood vials, true, but you should still prepare to die and die again, just not quite as frequently or pathetically as last time round.

Like most NG+ modes, Horizon: Zero Dawn rewinds the clock on the story but maintains your character's progress and gear for less of the slow burn stuff, but there’s also a number of new things to look forward to beyond your first playthrough. Players can receive new cosmetic rewards like face paints and focus elements when running through NG+ on a high difficulty setting, and there’s new ‘Adept” versions of weapons and outfits to keep things fresh, all boasting additional modification slots to brand out your customization options.

What’s also interesting is that the difficulty settings are locked in NG+, so you’re not going to be able to dial it down to Novice whenever you encounter a wiley Thunderjaw. Plus, you can skip the early missions with Aloy as a child. She’s adorable and all, but it’s not like you’re going to need those tutorials anymore, right?

With two different playable protagonists and an open-ended design philosophy, Dishonored 2 already has enough going for it to justify multiple playthroughs, but its NG+ mode is a flexible alternative which feeds off that desire to re-assassinate the same people all over again.

All your learned bonecharm traits, assigned runes, and discovered blueprints carry over into NG+, as expected, but the game allows you to re-spend all of those rune points in whatever way you choose, letting you invest in totally different skills and abilities compared to before. This even works if you’re playing as a different character from your original campaign, which can turn your second runthrough into a wilder, harder, but ultimately more liberating experience, and one that will feel completely different to what came before.

You’re not going to be able to see and do everything on your first playthrough of Persona 5. Sorry, but you’re just not. The real fans are going to have to play it twice, which is fine because you’ll probably want to anyway, seeing how it’s a swift, stylish JRPG with oodles of personality.

NG+ on Persona 5 takes you back to the start of the game with all your money, Persona, equipment, skill cards and social stats, but that last carryover is the most  important, as building those stats is usually where most of your free time was spent in your original save. With your social skills already buffed, you’ll have more opportunity to invest in your confidants and generally progress through at a more leisurely pace. New relationships can be formed and secrets uncovered in Persona 5’s NG+, making it well worth a look in.

With Visceral Games disbanded and Dead Space officially dead (for now), it’s always commendable to make a return trip to the franchise at a time when it was at the top of its game with Dead Space 2. Play it through once, then play it through again on NG+. I promise it's worth it.

With all your equipment, upgrades, and ammo in tact, Dead Space 2 is slightly easier on NG+ (unless you’ve jumped from ‘Casual’ to ‘Zealot’ on the difficulty settings), but that gives you more space to appreciate the finer things where you might previously have been hiding behind the sofa at the first sight of a necromorph. With its rigorous progression systems for both your weapons and abilities, playing Dead Space 2 twice is essential for savouring everything it has to offer, and NG+ provides a healthy environment for doing just that.

Never one to blend in with the crowd, Yakuza 5’s NG+ mode isn’t called New Game Plus, but ‘Premium New Game’. Ooooh, sounds fancy. The story starts from the beginning, but your completion percentage carries over along with your Revelations, levels, heat extensions, money, and items, making Premium New Game perfect for perfectionists looking to nab all those Trophies and 100% the entire thing.

Consider this a second opportunity to finish up any time-sensitive activities that you might have missed last time around, or focus on undiscovered collectables with the added advantage of all that money and experience you’re carrying. Given how overwhelmingly large and dense Yakuza 5’s world is, Premium New Game is therefore a great way to cement yourself as king of its urban jungle.

Batman: Arkham Knight’s NG+ campaign begins with a surprising and very different  cutscene to that of its original opening, telling you all you need to know about how distinct this second playthrough is going to feel for Bats and the player. You might have all your gadgets and upgrades from before, but the city of Arkham is not what it once was.

Enemy layouts have changed, so thugs without guns may now suddenly have guns or some other tool you weren’t expecting. Your visual cues during combat are gone, meaning no more easy counters and dodges. All combat challenges have now been updated to form an alternate, more difficult version of the encounter you faced first time round. Oh, and the difficulty is locked to Knightmare, the hardest setting in the game. So yeah, Rocksteady does not mess about when it comes to NG+.