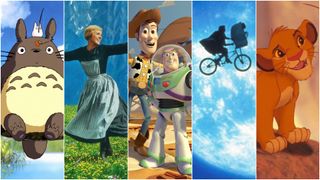 Curling up on the sofa with your loved ones for a fun family movie is a decades-old tradition. There really are few things nicer than settling down in front of the television, snacks in hand, for a film that everyone – young and old – can enjoy.

However, finding the perfect movie, one that suits parents and children alike, can be a daunting task. On the one hand, you don’t want to sit through an obnoxious children's movie that been produced by a corporate marketing team with the sole purpose of making your young'uns obsess over getting their latest toy. On the other, you don’t want to prematurely introduce your offspring to Terminator, thus giving them Arnold Schwarzenegger-shaped nightmares for the next fortnight.

Luckily, there are an amazing number of movies, both live-action and animated, that appeal to viewers of all ages – movies that will entertain the kids while either sparking childlike nostalgia in your cold, hardened adult heart, or have you snickering at clever innuendo while your children stare at you quizzically.

Making a definitive list of the best family films is impossible, because, thankfully, people’s taste is vastly different. Plus, we could have been easily filled this purely with Disney’s animated catalogue and Pixar movies (save for Cars). Instead, we have tried to showcase the wonderful variety of family cinema available to you, showcasing movies from around the world and spanning over eight decades. We have included multiple genres, from silly comedies to dramatic and even horror-tinged entries for older kids, and tried to include only one entry from a franchise of films (even though several might have a legitimate claim for a spot on the list) in order to ensure maximum diversification.

The movie: Exiled pirate captain and the Caribbean’s Most Wanted, Jack Sparrow (Johnny Depp), teams up with a local blacksmith, Will Turner (Orlando Bloom) to recover Sparrow’s ship, the Black Pearl, from a mutinous crew. Of course, a love triangle involving the governor’s daughter, Elizabeth Swann (Keira Knightley), emerges. Oh, and thanks to an Aztec curse, Sparrow’s old crew are now undead. High-seas hi-jinks ensue.

Why the family will love it: Although some scenes will be too scary for very young kids, any mature children and teenagers should have a blast with the non-stop Bruckheimer-patented action. The zombie and creature design is top-class, and the humour is well balanced against the drama. With an all-star cast, and a great performance by Johnny Depp’s, the parents shouldn’t get bored either.

The movie: A boy from a poor family dreams of visiting Willy Wonka’s magnificent chocolate factory. When he finds one of five golden tickets hidden inside Wonka’s chocolate bar wrappers, he finally gets the chance, but soon discovers the other four winners are all terrible children. What will happen once the magical tour begins?

Why the family will love it: The 2005 adaptation of the same novel, Charlie and the Chocolate Factory, is also an enjoyable film, and one that manages to ingeniously fit a joke about cannibalism into a piece of family entertainment. However, the 1971 adaptation of Roald Dahl's book still has it beat. Gene Wilder’s eccentric/unhinged Willy Wonka is a delight to watch, while the script is full of great quotes. Just beware of one slightly scary tunnel of terror scene.

The movie: A young nun leaves her convent to help look after the children of a high-ranking naval officer, Von Trapp. Through a zest for life – and whimsical musical numbers – she gets the over-disciplined children to come out of their shells, and at the same time, her and the officer start falling for each other. Eventually, a looming war threatens all their plans and dreams, but a resourceful family never gives up...

Why the family will love it: This charming movie will still win over ever the most cynical teenagers. With its beautiful songs, Julie Andrews’ great performance, and its upbeat message and optimism, The Sound of Music is still as vital as ever.

The movie: After returning from their honeymoon, ogres Shrek and Fiona are planning to settle down in their little hut in the middle of the swamp. However, when Fiona’s royal parents receive news of her marriage, they invite the newlyweds to visit their palace in Far Far Away. With Donkey in tow, and a new companion in Puss in Boots, a new adventure quickly unfolds for our heroes. The quiet family life will have to wait.

Why the family will love it: The original Shrek was great fun, yet its stream of pop-culture references have not aged particularly well. Shrek 2, though, is still as good today as when it came out. Great vocal performances from the whole cast are led by the introduction of the franchise’s greatest character, Antonio Banderas’ Puss in Boots. Shrek 2 has a wholesome message at its heart, too, and combined with a mix of humour, action and great music choices, it makes for a great family movie night.

The movie: While the Battle of Britain rages in the distance, aspiring witch Miss Price, played delightfully by Angela Lansbury, decides to use her magical powers to help defeat the Nazis. She lives in the remote countryside, far away from the heat of battle, and, like many others, she hosts children who have fled the city to seek shelter. With the help of these inventive kids, a witches’ school, and an enchanted bed, they go off to a fantasy land where they fight off those pesky invading Nazis once and for all.

Why the family will love it: In many ways, Bedknobs and Broomsticks is a relic. It looks 15 years older than it is, it's vision of WW2 Britain – even for a kids’ movie – is impossibly quaint, and the showtunes are ditties more than belters. Still, it’s simply too charming a movie to leave out. Bedknobs and Broomsticks has an innocence that’s enhanced by its war setting.

The movie: Rango is a pet lizard with delusions of theatrical grandeur who gets stranded on the side of a desert road. After only narrowly escaping a quick but painful death in the desert, a series of coincidences leads the inhabitants of a nearby town full of desert critters to believe him a hero. Using his flair for drama to somehow continue to escape being eaten, he turns into the town’s supposed saviour against the shadowy forces that aim to keep the townspeople poor and oppressed. Cue diverted water mains, circling buzzards, Bill Nighy as a snake, and surreal (and stunning) dream sequences.

The movie: Based on Neil Gaiman’s book of the same name, Coraline film tells the story of a disgruntled 11-year-old girl who discovers a secret door in her disinterested parents' new house. Seeking an escape from her dreary everyday life , she goes through it – only to find herself in a mirror world where her parents are attentive and loving. However, there’s a catch: everyone has button eyes, and if she wants to stay, she’ll have to trade her eyes for buttons...

Why the family will love it: Neil Gaiman has a knack for writing ‘grown-up’ stories that still feel like they’re genuinely told from a child’s perspective. This film adaptation of one of his finest novels encapsulates that spirit almost undiluted. The stop-motion animation suits the off-kilter storyline perfectly, and while it’s probably not for very young children, the scary bits here are really well suited to introduce a curious two-digit-aged kids to the concept of horror.

The movie: NBA superstar Michael Jordan, played by NBA superstar Michael Jordan, is at the height of his legendary career when he suddenly decides to quit basketball and become a baseball player. However, he struggles to adjust to his new, more pedestrian sporting reality, and is starting to regret his decision. At the same time, the Tune Squad, led by the inimitable Bugs Bunny, are kidnapped by an evil alien lord who wants to enslave them for all eternity in his space circus. The squad manage to bargain for a contest to earn their freedom: a game of basketball against the evil Monstars. When the Monstars steal famous NBA players’ skills to rig the upcoming game in their favour, the Tune Squad decides to enlist Jordan’s help to save their animated skins, unaware that he’s retired from the sport.

Why the family will love it: In true Looney Tunes fashion, Space Jam is outlandishly silly, only occasionally coherent, and doesn’t step off the throttle for the whole runtime. Jordan’s performance can be described as “wooden” at best, and the finale is filled with every sports-movie cliche in the book, but that’s precisely what makes Space Jam great. It’s got gags aplenty, absurd sports action, and a great cameo from Bill Murray. It’s a joyful romp.

The movie: Plucky piglet Babe has no intention of being the Sunday roast, so decides to prove his worth on the farm. His efforts at rounding up and sorting chickens are noticed by the farmer, Hoggett, who decides to let him have a go at rounding up the sheep in the field. Before they know it, Hoggett finds himself training Babe to compete in a sheepherding competition, and, despite dismay and mockery, they are determined to overcome the odds and win.

Why the family will love it: Australia’s finest export of the 1990s, Babe turned the animal comedy on its head by transplanting a pig into a role usually reserved for dogs. It’s full of heart and has a sweet message at its core, namely that you can do anything you set your mind to if you work hard enough. Plus James Cromwell is wonderful in the lead human role. Did we mention Babe was also nominated for seven Oscars, including Best Picture?

The movie: Restless teenage girl Moana has wanted to explore the oceans since she was a toddler, but any journeying out beyond the reef around her island is strictly forbidden by her father, the tribal chief. However, when the islanders’ coconut and fish sources run dry at the same time, she sets out on a voyage in secret. Out on the ocean, Moana meets the once-mighty demigod Maui, who reluctantly becomes her mentor, teaching her to become a master wayfinder. On their journey, they fight enormous monsters on a quest that seems almost impossibly hard, but will do more than just fulfil her mission if successful: it could help both of them find themselves too.

Why the family will love it: Big in scale, gorgeously designed, and filled with great songs written by Lin-Manuel Miranda, Moana is perhaps Disney’s finest recent animated hit. The heroine of the story, tribe leader-in-training Moana, has also provided inspiration for young girls and boys the world over, while the setting has ignited interest in the history and culture of Hawai’i and Polynesia.