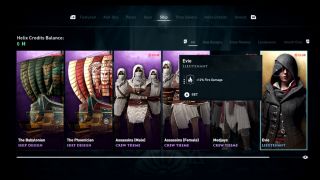 Whip-smart Evie Frye was the best thing about Assassin's Creed Syndicate, and she's back for Assassin's Creed Odyssey. Sure, she's not a playable character, but you can get her from the Ubi Store as a Special Lieutenant for your ship.

You'll need to be a member of the Ubisoft Club (which is free) to download her, and as well as reminding you of all the fun you had murdering your way round London, she gives you +12% fire damage to your ship. She's just one of perks you can use to upgrade your in-game vessel. You can also change the design of the ship, the theme - like whether your crew look like Medjay or female assassins - and upgrade crucial abilities.

The Assassin’s Creed Odyssey release date is set for October 5 on PS4, Xbox One, and PC, with the stealth action taking place in Ancient Greece circa 431 BC. You can play as either Alexios or Kassandra, and naval warfare will be a big part of the game. Like the train in Syndicate, your ship will also act as home base, so your choice of Special Lieutenants will be key. Check out our hands-on Assassin's Creed Odyssey preview for more information about how it all works.

While we can only imagine the chronological shenanigans that would have to happen to explain Evie Frye making the jump from 1868 to 431 BC, we're just happy to see her again.

Can't make it to Gamescom but want to feel like you're part of the action? Be sure to check out the full Gamescom After Dark schedule and tune in.