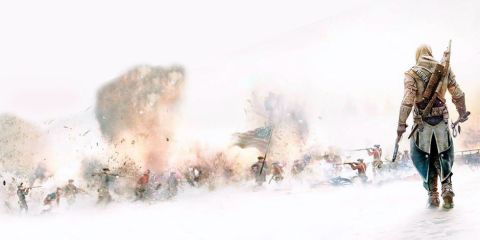 Despite being deeply flawed, 2007’s Assassin’s Creed was a damn fine example of the current console generation’s potential, one that was achieved in the subsequent Ezio trilogy. But unlike its predecessors, Assassin's Creed III was a game that had few flaws to fix, no big problems to correct, and no gameplay mechanics to reinvent. Despite being bigger and, in many ways, better, ACIII is a flawed experience, held up by its incredible gameplay, and weighed down by a new infestation of bugs and poor design choices--and the Wii U version is the messiest of the bunch.

Desmond Miles' fight against Abstergo gets its fair share of screen time, moving the modern day narrative forward to its inevitable conclusion, but a majority of ACIII is focused on Connor Kenway battling the Templar Order during the American Revolution. It's impressive to see how the series handles a more modern setting, telling an interesting tale that adapts well to abundant firearms, but this leap forward in time brings with it a muddled story that never really finds its ground. Whereas past games have flourished in their historical fiction, ACIII sometimes chokes on it, struggling to place Conner in a world so many gamers are well versed in.

Though its narrative is somewhat of a letdown, Assassin’s Creed’s gameplay is better than ever, with impressive parkour and incredible combat that favors more aggressive battles. Connor has a physical presence that Altair and Ezio don't, and his bulk makes combat brutal and exciting. You’ll love bashing in the teeth of waves of soldiers, or smashing your tomahawk (shaped like the Assassin’s Creed logo) into the backs of your foes.

And despite being a bulkier character, Ubisoft still managed to make Conner extremely nimble, giving him the ability to climb both buildings and trees alike. This is most important in the new wilderness areas, which are full of animals to hunt, trap, and skin. It’s also here that the new animations and visuals are at their strongest, and you’ll be amazed at how lifelike Connor looks as he treads through the snow to chase down a target in the woods.

If you read our Assassin's Creed III review last month, you know that the game wasn't all we wanted it to be. There was plenty to like--from the beautiful vistas to the stellar combat--but it was far from the game most expected. Besides the problematic story, there’s also the matter of a totally broken and uninteresting economy and a disappointing number of technical issues, including visual hiccups and AI problems that made completing some of the game's missions more difficult.

The Wii U version in particular includes some problems all its own, like muddy visuals and weird looking textures. Sometimes it looks identical to the Xbox 360 and PlayStation 3 version, and other times it looks like Connor’s textures haven’t fully popped in. Multiplayer is included, and it's a good time if you can get in a game, but that's a pretty big "if." The servers were almost entirely empty when we searched for people to play with, and unless something changes you'll likely experience the same frustration.

Helping negate some of the Wii U-exclusive faults are some Wii U-exclusive benefits. The map on the GamePad makes hunting down missions and collectibles easier, and switching between items, which was relatively clumsy in the other versions, is improved with the touch screen. This screen is also helpful during the surprisingly entertaining sailing segments, thanks to the increased size of the radar, making it easier to see where your ship’s guns are aiming.

Assassin's Creed III is a technical marvel, and well worth playing, even if it doesn’t live up to the lofty expectations established by the Ezio trilogy’s success. Combat is incredible, and the cities of Boston and New York deliver some of the strongest open-world gameplay you’ll experience this generation. And yet, it’s still an extremely uneven experience, even if the strong gameplay outlives the issues to make for a solid package. The Wii U version has some interesting features, including nice GamePad usage, 3D TV support, and the ability to play exclusively on the GamePad with Remote Play, but additional technical problems keep this port from being a clean kill.