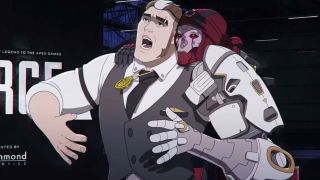 The art and science of fall damage, and how it can make or break a video game

Rest in peace, Forge. We hardly knew ye. Originally introduced as the next playable hero for Apex Legends, the five-time Hyperfighting Federation champion met a bloody demise at the hands of Revenant during a televised interview in World's Edge. Revenant, long teased by Respawn as another imminent addition to the roster of its battle royale hero shooter, is now positioned to be the face of Apex Legends season 4. As for Forge… well, his deathbox can still be looted at the scene of the crime...

Forge's death at the hands of Revenant had been predicted ever since the character was originally announced, with all the telltale signs hiding in plain sight. Respawn had been subliminally dropping clues about the enigmatic robot assassin for months, so when the studio introduced Forge as season 4's new Legend with nothing but a single piece of concept art, eyebrows were inevitably raised. Indeed, the idea of a bro-wrestler with a robotic arm immediately rang alarms bells as a poor fit for a game which, until now, had prided itself on the diversity of its character roster.

In hindsight, of course, Forge was set up as a satirical pastiche to the kind of walking cliches we see in every other blockbuster shooter (a throwaway comment from Bangalore reveals he's a ghastly misogynist), and Respawn's subsequent dispatch of the character could be read as the studio making a clear statement about how it wants to avoid exactly those kinds of stereotypes. It's a stance from a studio that, high off the success of Star Wars Jedi: Fallen Order, has finally found its voice.

As it happens, the battle royale genre as a whole has enjoyed some of the most inventive storytelling seen in interactive entertainment over the last few years, thanks in no small part to the success and impact of Epic Games' work on Fortnite. Through its two-pronged approach to expanding the game's lore – twinning environmental storytelling with virality-primed online stunts – Epic has harnessed the power of video game theorycraft to sustain interest in the development of its in-game universe, keeping players on their toes with new clues and insights into the past, present, and future of the island upon which its last-man standing deathmatches take place.

Respawn has clearly taken inspiration from this strategy when launching each consecutive season in Apex Legends, but the studio has also taken a page from Blizzard's book, focusing on developing its characters just as acutely as the wider universe they inhabit.

Overwatch, of course, has famously fallen short at bridging the disconnect between the game's rich fiction and its exclusively online firefights, something which Blizzard is attempting to rectify via a full campaign in Overwatch 2. But Respawn is arguably doing a better job of navigating that space, with Forge's surprise execution just one example of a universe-shattering event that blurs the line between narrative and gameplay, offering real-time story developments that feel compelling and exciting in equal measure.

Of course, we can't rule out Forge returning to Apex Legends entirely. A few keen-eyed fans have pointed out the clues to suggest that Revenant didn't kill the real wrestler, but his stunt double, and that the real Forge will be back to exact his revenge later in season 4. It's a grand theory, sure, but – then again – so was the prediction that Respawn would kill off one of its Legends before he even set foot in the game.

Apex is about to celebrate its first anniversary, but the year ahead is crucial for determining how much life this game has ahead of it. Is it destined to fall to the wayside along myriad other battle royale titles, or can Respawn keep the fire burning to furnish the kind of self-sustaining ecosystem that every online game dreams of?

Forge's death is exactly the kind of shake-up that can keep the game at the centre of the conversation, and suggests that Respawn isn't afraid to get think laterally in how it communicates to its fanbase. When you consider that the studio has gone from a relative unknown entity into a household name in a single console generation, it's hard to picture anything but more victories from one of the best games of 2019.