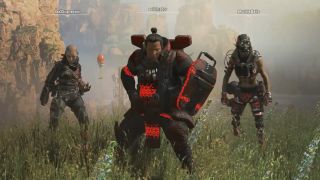 Just because you've got a do-nothing AFK player on your Apex Legends team, doesn't mean this round will be a guaranteed loss. With enough perseverance, you can even forcibly push that dead weight to victory, as two friends with the handles xxxStuxnetxxx and MuckleBalls recently found out when they got saddled with an AFK Gibraltar by the name of evisirrator. Rather than quit out, they decided to push him all the way to a Champion finish.

Though we would've loved to see the match in full, you can watch two minutes of amazing highlights in the video posted to Reddit by user Crackly_boi. Given that the inhabitable section of Kings Canyon is constantly shrinking due to the constricting storm, you'd think these players would simply leave their absentee Gibraltar buddy to die straight away and see if they could hack it as a duo. But no - they take on the noble duty of continuously pushing the big galug to safety over the course of the match, using a combination of countless melee backstabs (say a prayer for Gibraltar's spine) and Wraith's Dimensional Rift portals for a kind of self-imposed handicap that makes the eventual Champion status all the sweeter.

"We defend at all costs" says MuckleBalls when they've manage to push Gibraltar into a little house as the match nears its end and only two squads remain. "If we can pull this off, it's going to be fucking legendary," he adds. Sure enough, the two manage to defeat the last remaining squad, even taking the time to revive their AFK teammate after he's downed by a spray of bullets.

If you think the vid's a fake and Gibraltor was contributing to the team in all the moments between the highlights, his '0 kills / 0 damage dealt' stats at the end of the round should answer any questions. It all goes to show that you should never give up, even when things look bleak - and who knows, you might just turn the adversity into an amazing feat from hilarious circumstances. The only thing more impressive would be carrying two AFK teammates to the Champion's circle, but that's asking a lot - and Respawn will soon start penalizing Apex Legends players for leaving early, so best not to ask people to intentionally AFK so you can make an attempt. Still, Crackly_boi had some kind words for their entirely useless teammate: "Evisirrator, if you're out there... You're the best Gibraltar I've ever played with."

In other fun Apex Legends news, someone made the Borderlands cutscene intro using Apex Legends characters and it's legendary.