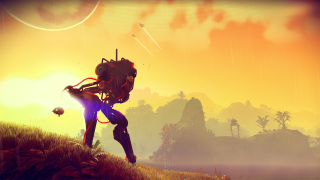 It's a bit of an understatement to say that the global reaction to No Man's Sky on release was a passionate one but it was still a surprise when the UK's Advertising Standards Agency waded in to investigate claims of misleading advertising. The independent body raised an investigation as a response to 23 complaints specifically regarding the content and images and video shown on the game's page on Steam. This has now concluded and Hello Games has been found to have not misled consumers.

The full ruling is quite an incredible read with breakdowns of every complaint and response with evidence and, yes, there's even a discussion about water effects. Complainants had disagreed with the portrayal of certain kinds of creatures, building types, warp speeds, and the reference to warring factions as well as large scale space battles. Even the use of the phrase 'trade convoys travel between the stars' was put under the spotlight during the investigation but cleared as the ASA was provided evidence of trade ships warping from planet to planet.

When it comes to the animals, terrain and building types, the ASA ruled that a procedurally generated game will always be different for each player. "We understood that, as NMS was procedurally generated, player experiences would vary according to what material was generated in their play-through," it states. "The summary description of the game made clear that it was procedurally generated, that the game universe was essentially infinite, and that the core premise was exploration. As such, we considered consumers would understand the images and videos to be representative of the type of content they would encounter during gameplay, but would not generally expect to see those specific creatures, landscapes, battles and structures."

The procedural generation element is also cited when it comes to how often massive space battles take place. "A number of complainants were concerned that large-scale space battles of the type shown in one of the videos was not part of gameplay," says the ruling. "We acknowledged Hello Games’ assertion that the larger battles were more unusual, and noted the footage they provided of a materially similar type of battle. In relation to these features, we considered that the ad did not depict gameplay that differed materially from the footage provided by Hello Games, and that it was therefore unlikely to mislead."

Check out the full ruling here.  Do you agree? Let us know below.