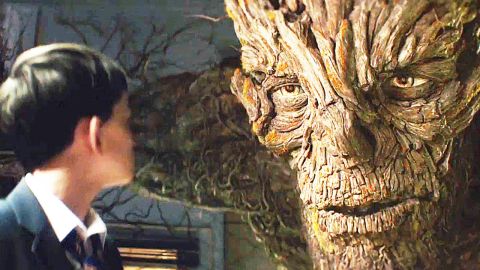 If this isn’t the biggest tearjerker of 2017 we’re in for a distressing year. A truly, ahem, tree-mendous fantasy.

It's a cruel quirk of scheduling that A Monster Calls is releasing in cinemas on New Year’s Day. Thought the January blues were bad? An entire month of misery ain’t got nothing on the infinite sadness of J.A. Bayona’s fantastical tearjerker.

Having coaxed moments of startling distress out of a young cast in 2012’s The Impossible, Bayona pulls a similar trick here, lowering the intensity but doubling down on understated heartbreak. Near-newcomer Lewis MacDougall plays Conor O’Malley, a 12-year-old boy whose mother (Felicity Jones) is stricken with cancer.

One night the ancient yew tree visible from Conor’s bedroom window uproots itself in order to relay the first of three allegorical stories. After which, the Monster (Liam Neeson) claims, Conor will offer his own yarn – one that will “reveal his truth”.

The film’s blend of the everyday and the unreal raises questions: is Conor retreating into these dreams as a coping mechanism? Or is Neeson’s demonic ent genuinely some ancient wonder answering a desperate cry?

Told from Conor’s perspective – all low angles and half-heard conversations through doors – there’s human tragedy underpinning every utterance and action. It’s a supremely affecting and sensitive depiction of internal turmoil.

The bulk of the film’s emotional burden is placed on the capable shoulders of MacDougall who impresses, even acting opposite pixels. Crucially, Conor isn’t a two-dimensional misery magnet. There are profoundly authentic observations about the unspoken traumas that a situation such as Conor’s can inflict.

Felicity Jones is inspired casting as Conor’s mother, her youth and natural warmth rendering her terminal illness all the more tragic. Toby Kebbell pops up as Conor’s estranged father, whose failings are masked behind a brave face.

Such a contained tale could run the risk of feeling small, but is effortlessly cinematic under Bayona, who provides visual flair – most notably in two gorgeous, fully animated storybook sequences that take their inspiration from Jim Kay’s evocative novel illustrations.

As for the mo-cap Monster, it’s a memorable creation – gnarled branches, fiery eyes and Neeson’s sonorous cadence lending a sinister ambiguity to the beast’s motivation. Seamless VFX and performance work in unison to realise one of the most effective CG characters in recent memory.

If there’s a problem, it’s that the music can feel manipulative, and it’s not immediately clear how suitable this ‘family’ film is for its target audience – it may be a 12A, but drag adolescents along and back-to-school-blues will feel like a pick-me-up.

If this isn’t the biggest tearjerker of 2017 we’re in for a distressing year. A truly, ahem, tree-mendous fantasy.