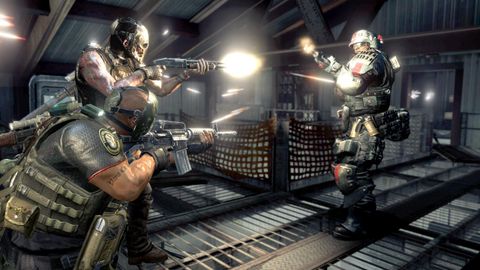 Ask anyone about Army of Two and they’ll probably go “Oh yeah, the guys with the masks, right?” and immediately draw a blank. That’s how little impact the original had. It was a decent game, with accomplished co-op features, but was ultimately a victim of its own chronic lack of originality. But all that’s changed. With The 40th Day, EA have completely rejuvenated the series, making it smarter, funnier, prettier, and crucially, loads more fun to play. And, not only that, it has one of the best morality systems we’ve ever seen – shaming the binary good/evil choices of games like inFamous and BioShock. And, honestly, who expected that?

And as for the weapon customisation – well, that’s on a whole other level. The last game let you stick scopes and grips on your guns, but now there are more building blocks than you’ll know what to do with. From retrofit silencers made from old Coke cans, muzzle flash reducers, and underslung shotguns to chunks of mobile cover strapped to the barrel – it’s ridiculous. But not as ridiculous as the new paint jobs. Ever fancied a gold pistol? A leopard print AK-47? Now your garish gun-based fantasies can be realised. It certainly adds a touch of style to slotting a terrorist. You can even customise your mask and armour for online play. Design a decal on the game’s official website (like in Skate 2), download it to your game and apply it to Rios or Salem. Clans will especially love this feature.

The heroes have had an upgrade too. They’re still mercenaries for hire, and they still wear those masks, but the big difference is that they’re actually likeable. In the original they were one-dimensional ‘dudes’ – all fist bumps and dumb dialogue. Now they’re witty and engaging, showing unexpected humanity during the tougher moral choices. The script’s not a revelation – just unusually sharp for a game where the focus is shooting hordes of identical soldiers with gold-plated guns.

Rios and Salem, now working for their own private military company, are in Shanghai planting radar beacons for a nameless client. They don’t know why, but the pay is good; they are, after all, mercenaries. Suddenly, missiles rain from the sky destroying the city. Skyscrapers topple, planes crash, fires break out – and it has something to do with those radar beacons. The duo rushes out of the city to escape, and so begins the mystery; who attacked Shanghai? And why? And was it their fault?

To find out, you’re going to have to work together. So it’s a good thing that Army of Two’s co-op features are massively improved. As well as returning tricks like giving your partner a leg-up over walls, synchronised co-op sniping and using mobile cover (the infamous car door shields), Rios and Salem have an array of other abilities at their disposal. Our favourite is the mock surrender. Before combat is initiated, you can lower your weapons and raise your hands. As the enemies radio their superiors for further orders, you can quick draw your pistol and take the goons out in slow motion.

Hostage taking is a clever new feature. Enemies are now ranked – from regular soldiers to officers and elites – and sneaking up and grabbing one higher in the food chain will force the others to drop their weapons and surrender. It’s up to you what to do next: instantly execute them, lowering your morality, or tie them up to appease your guilt.

Sometimes civilians enter the mix. You can either coordinate a synchronised attack on the hostage takers so the civilians aren’t harmed, or let them die. Often the best solution is having one of you distract the highest-ranking enemy, while the other sneaks up and grabs him. Saving hostages yields weapon parts and cash, while failure to rescue them hits your morality hard.

It does scale too. In one level the pair fights across a destroyed underpass. It’s a huge space, with loads of opportunities for flanking and cover, and when a heavy trooper is introduced and cars start blowing up, things get even more hectic. That’s another thing AOT does well; providing massive spaces to play in, complementing the co-op mechanics.