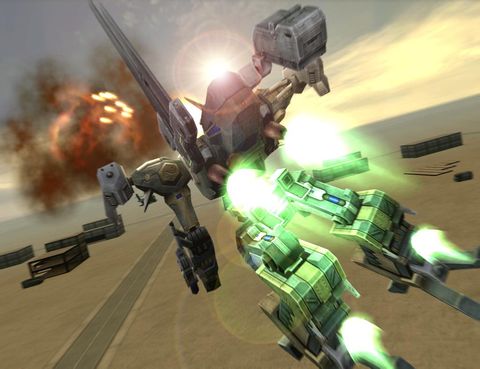 Last Raven’s graphics are pretty much what you’d expect for a mid to later generation PS2 game. They aren’t bad, but they definitely aren’t groundbreaking either. Stages are either very expansive and bare, or very closed off, with hardly anything inside until you run into a battle or two. It’s the same environments you’ve come to expect: desert, warehouse, base, etc.

If you missed it the first time around, chances are you won’t give Armored Core: Last Raven a second thought, and you shouldn’t. If you’re an Armored Core fan, you probably already downloaded the game and don’t need a review to decide. If you’re curious, you’re better off getting a cheap copy of the PS2 release rather than this. While the game’s battles offer some enjoyment, the terrible controls and finicky camera make us hope this is the last Last Raven.